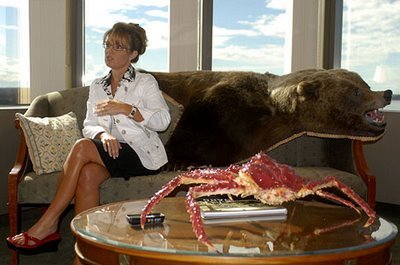 Sarah Palin decorated her Alaska office with a massive bearskin, shot by her father. Shawn Henderson at the Huffington Post is appalled.  (Who he? The eBay design director. Who knew they had one?)

Taxidermy is a tricky subject--animal lovers hate it, no matter how long ago the animal died, decorators love it, especially the out sized and/or rare.  The September Vanity Fair ran a story by Olga of Greece, (royals don't use last names, except for the Windsors, who aren't really named Windsor, but that's a different story) about the rebirth of the famed French animal stuffing atelier,  Deyrolle, after a devastating fire.

Mrs. Blandings has a nice retrospective going on,  as does The  House of Beauty and Culture.

Banksy takes the whole meme there and back again, by mounting McNuggets in a less-than-natural pose. 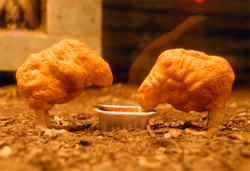 Posted by KateC on October 15, 2008 in Politics, Interiors