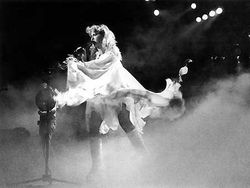 Somehow Ruth La Ferla managed to write an entire piece about the enduring style of Stevie Nicks without ever resorting to the phrase "unmade bed".

Stevie once told a reporter that she saw a woman on the street, and wanted the same look:

So when I joined Fleetwood Mac and I had some money, I went to a lady and I said, I want you to make me a raggy chiffon skirt that looks sort of like an urchin on the wharves of London.

To be fair, La Ferla dubs her the anti-Madonna.