Still The Wild One? 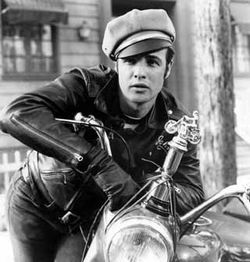 While strolling past the Santa Fe, NM plaza, the amplified music of the folk singer entertainer was temporarily drowned out by a group of motorcyclists riding by. Their loud bikes shouted “look at me,” but I had already guessed what I would see. This would not be a youthful motorcycle gang led by a Marlon Brando  The Wild One look-alike, but aging fathers and grandfathers reliving the feelings of their youth. The do-rag of the gentleman who stopped closest to me held back not the luxuriant hair of youth, but the thinning gray hair of upper middle age. His minimally muffled Harley-Davidson might have sounded slightly menacing, but the rider looked benign. His portly figure spoke of too many beers and too much sitting, and for the sake of his body he would have been better off walking, hiking, or bicycling.

But this ride was not about how he appears to the outside world, but how he feels inside. Like many summer riders, during most weeks of the year his life revolves around the typical responsibilities that tie a man down: a wife, a family, a house, and a regular job or profession (assuming he’s not retired). But for the moment he is riding free: he has escaped all of that and feels unencumbered by conventional obligations.

Granted he may have to bring along a Lipitor prescription for his high cholesterol, and perhaps other medications for high blood pressure or other ailments, but these are far from his thoughts. And tonight he may have to phone home to let his wife know he is safe and well, assuming that she is not driving a support vehicle for the group and will meet him later at some prearranged motel. But none of that matters now. At this moment in time he has escaped the restraints of everyday existence, and with “Born to be Wild” as his mental soundtrack, he can imagine himself a youthful free spirit riding toward the unknown adventures of his future existence.