Stylista On The CW: Go Soak Your Almonds! 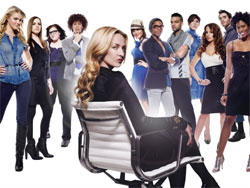 Stylista, the newest reality competition show on The CW, debuted last night. Humiliated hopefuls vie for a lowly job at Elle. Fashion mag editors are now obligated to be imperious, capricious, and talk funny. Anne Slowey made the role her own by her amusing inability to walk in high heels.

I worked at a fashion magazine one summer. Actually, I'd entered the Mademoiselle Guest Editor contest, but as I'd worked in the rag trade (receptionist/fit model for a 7th Ave. firm) the summer before, I was disqualified.  Luckily, Mary Cantwell read my stuff, liked it, and offered me a real job, which by summer's end, convinced me that fashion journalism was not my calling. But that was long ago, in another country, and besides, the wench is dead. (For the record, I frequently fetched coffee, but never breakfast, and certainly not breakfast with a little scented candle on a tray.)

Stylista competitors aren't any worse than those on any other shows. There's the Ugly Betty chubby girl with actual style, a boutique-owning bitch, a guy with a Brit accent who dresses like an extra in Oliver!, and a bunch of others. One blond is named Cologne, and I was waiting for the "Oh, Duh!" moment, but it never came.

Last night's episode should have killed any lingering ideas about women dressing to attract potential partners. Kate, an ex-law student, sports a decotellage that distresses some of her fellows (unsurprisingly, no straight men appear on the show) and Elle's fashion director. You'd think someone would have the wit to suggest she go into ad sales. She gets all weepy about covering up. Who says big boobs aren't  a means of self-expression?

Like the Rolling Stone show, the Car and Driver show, the Seventeen magazine show, and MTV's student newspaper show, watching would-be journalists isn't very exciting. (To be fair, the student paper  show did have great characters, full of venom.) The producers here downplay the process and stress the bitchy interaction and asides. Why PBS doesn't produce a "I Want to Edit The New Yorker" reality series is beyond me.

Considering all the downsizing in the magazine world, perhaps the lucky ones get cut early.

Posted by KateC on October 23, 2008 in Fashion, Television, Magazines