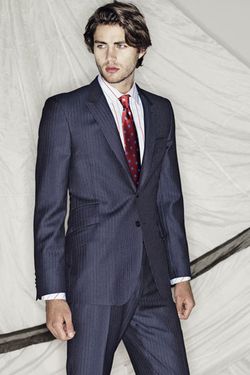 A young corporate lawyer that I know was thrilled that he found a $4,000 Paul Smith suit in his size on sale for $800. He snatched it up and took it to his tailor to be fine tuned in fit. (The photo at right shows one of Smith’s suits.)

A friend of mine whose work never requires that he dress up could not understand why anyone would pay thousands of dollars for a suit. This friend likes to cook, and, while looking around a kitchenware store with our wives, I pointed out a Victorinox chef's knife which Cook’s Illustrated had praised as a inexpensive, yet favorite tool in their test kitchen. He then showed me the knife that he wanted, a Shun chef’s knife. It was incredibly beautiful, but given that it was priced at about five times as much, I wondered if it could possibly function five times as well?

I suppose that depends on what “function” means. If you love to cook and love to work with beautiful tools, then owning the Shun knife might be a daily source of pleasure. And if your work involves frequently dealing with clients who wear suits worth thousands of dollars, then wearing a suit in which you feel just as well-dressed could be both valuable to your business and personally pleasurable. Value in both cases depends on just how much the suit or knife means to the self-image of the buyer.