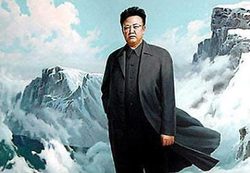 Taking a leaf from Generalissmo Franco's political playbook, North Korean semi-strongman Kim Jong Il might be sick, might be dead, might be stuffed.  He missed the country's 60th anniversary parade, leading to increased message traffic at Langley, no doubt.

But he's got the strength of 10,000 tigers, if the official art of North Korea is accurate. In fact, the whole country is good looking, strong, brave and energetic beyond belief.

North Korean posters are ubiquitous, with strong graphics, bold colors and relentless cheery exhortations, inviting the passer-by to join in: 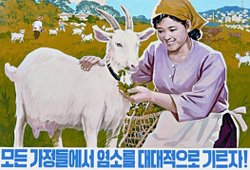 LET'S EXTENSIVELY RAISE GOATS IN ALL FAMILIES! (Los Angeles is on board with this.) 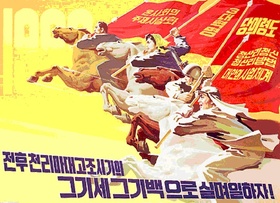 LET'S LIVE AND WORK IN THE SPIRIT AND VIGOR OF THE PERIOD OF THE GREAT POST-WAR CHOLLIMA UPSURGE!

David Heather is the foremost authority on these posters, writing:

As important tools in the mobilization of the masses, posters have to have an instantaneous impact on the viewers' understanding and their desire to act upon this understanding. Their message has to be accessible, clear and direct; informative and explanatory, as well as exhortative. The link between contemplation and action is crucial.

The stylization of the figures turns them into instant icons--almost too perfect to be real, but as familiar pop singers in the West. The soldier, the scientist, the farmer are remote, benevolent and courageous, and urge the viewer to forget petty everyday cares and join them in the adventure of building North Korea.

Posted by KateC on September 09, 2008 in Propaganda