Tears Of Mermaids: My Kind Of Market, All Pearls

, Stephen G. Bloom (interviewed Monday) provides a behind-the-scenes tour of the worldwide pearl industry. This is the last of four installments on the Chinese freshwater pearl farms that are transforming the world of pearls. Read the first three here, here, and here. 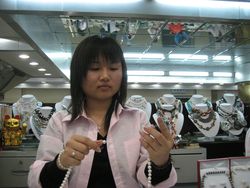 After my plant tours, I made my way to Zhuji’s public pearl marketplace, where freelance family vendors set up stalls to sell their wares. The least I could do is buy a necklace for Iris, pulling double-duty, caring for our son, Mikey.

As I strolled inside, I immediately liked the market. There was something unplanned and random, as there is about the best of farmers’ markets wherever they are. Other than for pearls, I hate shopping. Here there were no vegetables, fruit, meat, chickens, fish. No fresh baked goods. No eggs or rodents. No clothes, CD or DVD knock-offs, no fake Louis Vuitton, Chanel, or Prada purses. No cut-rate soccer jerseys. No gold or silver. Just pearls. My kind of market.

As I walked up and down each row, the hundreds of vendors, all women, all in the most vociferous and vigorous way, began hawking pearls directly to me, the sole Westerner there, someone they undoubtedly figured to be loaded.

High-quality, near-perfect round 10–12-millimeter choker strands were going for the equivalent of $75–$200. That weren’t cheap, but similar strands fetched as much as five times that in the States

As I made a loop back again to the second aisle, a pretty woman shouted, “I luv-e you, sir!” I imagined carrying my newfound Pearl Princess through the pearl market to thunderous applause in a Chinese remake of An Officer and a Gentleman.

High-quality, near-perfect round 10–12-millimeter choker strands were going for the equivalent of $75–$200. That weren’t cheap, but similar strands fetched as much as five times that in the States, and if the retailer called the pearls Japanese (or Australian), the price would be higher.

At first, I wanted to opt for a white Jackie Kennedy choker, but that would be classic Japanese akoya pearls (like the ones my mother used to wear), and today those pearls look small and dated. Besides, this was China. Why get a knock-off Japanese strand in China? What made sense was to buy a strand of dyed Chinese freshwaters.

I was about to pay a stranger for one necklace of 31 matched pearls more than what most workers in Zhuji earn in an entire month. I wasn’t sure if I should feel guilty or glad that I was investing so much in one family’s economy.

I found a vendor, in her mid-forties, and started bargaining. Shaving $10 or $20 meant a lot more to the vendor than it did to me, and we settled on $140 for a strand. I was about to pay a stranger for one necklace of 31 matched pearls more than what most workers in Zhuji earn in an entire month. I wasn’t sure if I should feel guilty or glad that I was investing so much in one family’s economy.

I opted for a strand of slightly punk pinkish pearls, but after going through all the strands, I found nicks and abrasions in more than several of the pearls, so I asked to see a bag of loose pearls of a higher quality.

I sat in a corner of her stall, carefully picking out three-dozen drilled pink pearls I thought were perfect, and handed them to the vendor. She picked them up, laid them on a table (with the requisite white tablecloth) and went to work, thread and needle in hand.

Within fifteen minutes, she’d strung the pearls, tight little knots between each, and had put a small clasp on the end. I examined them, and they were as perfect a strand as I’d seen.

The vendor held the strand by the clasp, pulled a silk pouch from a drawer, loosened the black string to open the top, and then dipped the pearls into its new home. She tightened the string closure, and smiled as she handed me the pouch. We each bowed every so slightly.

Posted by Virginia Postrel on January 28, 2010 in Books, Business, Jewelry