Tears Of Mermaids: Pearl Processing, From Tweezers To Transformatons

, Stephen G. Bloom (interviewed Monday) provides a behind-the-scenes tour of the worldwide pearl industry. This is the third of four installments on the Chinese freshwater pearl farms that are transforming the world of pearls. Read the first two here and here. 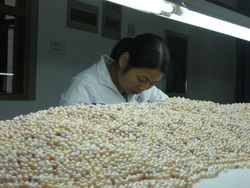 Back in Zhuji, managers took me on tours of six mega pearl-processing plants, which lined the town’s main thoroughfare. Each contained endless rooms of sorters, in which tens of thousands of pearls poured onto long tables covered with taut, stretched white tablecloths. Under banks of bright fluorescent lights, scores of girls no more than sixteen sat on rows of benches, peering over multitudes of pearls. Each girl used oversized bamboo tweezers, grouping the pearls according to a variety of criteria — color, shade, shape, size, surface quality, lustre, orient. Each girl wore a smock and cotton sleeves cinched at the wrist and above the elbow.

My presence caused no small amount of tittering among the girls. “Do you mind if I ask you some questions?” I asked one girl, though Sofinny Kwok, a company minder assigned to me.

She flushed ruddy cheeks and very white teeth, the unlucky recruit singled out by the middle-aged foreign man. I could see how terrified the girl was, in front of her friends, bosses, a strange-looking, curly-haired stranger who spoke a language she had likely never heard before.

The employee sputtered that said she had worked as a pearl sorter for a year, and was one of four children who migrated from southern Anhui Province to Zhuji. Yes, she enjoyed her work. Of course, she enjoyed her work. In fact, she loved her work. I got it. She said through Kwok that she hoped to return to her home in several years, after saving money, to get married and start a family.

Rank-and-file workers at the processing plants were almost all women from fifteen to thirty years old. Most started out at the equivalent of 1,200 RMB a month, which converted to $167. (RMB is the abbreviation for Renminbi, which means “People's currency.”) This compared with $2,500 a month in Kobe for the same work done by workers with the same skills.

Kwok suggested there was ample opportunity for advancement in the company. In ten years of employ, sorters who showed exceptional promise could earn as much as 3,000 RMB, or $418 a month. The job is 8 a.m. to 5 p.m., six or seven days a week (depending on the season), with two tea breaks a day. 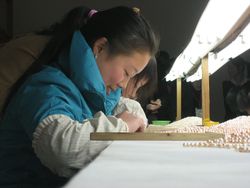 “Reliability, dependability, a good attitude. We look for girls who are stable, have good eyes, able to concentrate,” said Kwok. Indeed, after forty, he said, a sorter’s vision begins to soften and her worth to the company declines. “This is job for young girls,” Kwok said with no apologies. “Many far from their home. They have companionship here. Very few stay for more than ten years. This is good adventure for girl from a rural village.”

Once the millions of pearls have passed through the banks of hundreds of eagle-eyed sorters, each pearl is classified into further minute categories. Then the pearls are sent to an assortment of treatment rooms.

I came to think of these rooms as a kind of transformatron, where pearls, some plain and homely, come out stunners. Kwok opened a heavy metal door lined with shiny chrome and sparkling mirrors. I stepped inside. The room was so bright, I immediately looked down to shield my eyes. Inside were hundreds of large glass apothecary-type jars filled with thousands and thousands of pearls, all sitting under nonstop, very bright fluorescent lights and mirrors on the walls and ceiling. Pearls would stay here for weeks to months, to be transformed into orbs with vibrant shades, dazzling shines, and effervescent orients.

In another transformatron, I saw jars filled with pearls going from various stages of white, to gray, then to black, so eventually they’d be as dark as classic Tahitians. I walked into another transformatron, and the opposite was happening: mousy off-whites were being bleached over a course of weeks and months to turn into brilliant whites in an attempt to mimic the dazzling natural shades of Australians.

I could hear the telltale pearl plink: the click-clack-click of pearls bouncing off of each other and the side of the vats. Pieces of cork, ground-up walnut shells and eucalyptus chips, wax, even pulverized gold or platinum dust were added to enhance the pearls’ lustre. “Shine is good,” Kwok said, adding, “as long as not too shiny, then it look fake.”

This kind of wholesale enhancement and color alteration included sunlight, heat lamps, irradiation, various chemicals (silver nitrate, hydrogen sulfate, metallic silver), dyes (potassium, carotene, pomegranate extract, cobalt, and silver salts), as well as constant florescent light. Some rooms were lit brighter than a glary day in Nome, others were sealed and kept pitch black. Still other rooms were where which pearls were heated to infuse new color. Nearly everything could be altered about the pearl, except its size and shape, although I have no doubt Chinese technicians were working on pearl-growth hormones, too.

Kwok ushered me into more than two dozen transformatrons, each for a different purpose. He freely copped to the oft-repeated charges that the Chinese treat their pearls, enhancing their lustre, deepening or altering colors. Neither Kwok nor any of the other managers trailing on my tour was in the least defensive about the business of pearl treatments. It was no big deal. Whereas to the Tahitians, Philippines and Australians, as I was to learn, such wholesale tampering with the integrity of a pearl was akin to fraud and manipulation. Executives from all three nations angrily charged that the Chinese with essentially creating fake pearls by employing these methods.

But Kwok just shrugged his shoulders when I asked. “We do it to make our pearls as competitive as we can,” he said no apology.

Kwok took me into another room where large stainless steel Mixomatic-type vats sat, into which workers dumped sacks and sacks of pearls for polishing. I could hear the telltale pearl plink: the click-clack-click of pearls bouncing off of each other and the side of the vats. Pieces of cork, ground-up walnut shells and eucalyptus chips, wax, even pulverized gold or platinum dust were added to enhance the pearls’ lustre. Kwok again had no qualms about such methods. “Shine is good,” he said, adding, “as long as not too shiny, then it look fake.”

There were other rooms in this Mission Control of Pearls, in which workers further refined already matched pearls before they were classified into varying grades. The women worked their tweezers fast. The pearls proceeded to rows of more employees, who sat before drills, placing a new pearl in a slot to be drilled every three to five seconds. Still another room was filled with more young women with the nimblest of fingers, for here was where stringing took place.

It all was a continuous production line that spanned the length of a hangar-long building, all leading up to the Sales Hall, where buyers could purchase anything from bushels of sorted pearls to completed hanks of AAA-quality pearls.

Next: At the pearl market

Posted by Virginia Postrel on January 27, 2010 in Books, Business, Jewelry