Tears Of Mermaids: Pearls Straight From The Farm

, Stephen G. Bloom (interviewed Monday) provides a behind-the-scenes tour of the worldwide pearl industry. This is the second of four installments on the Chinese freshwater pearl farms that are transforming the world of pearls. Read the first one here. 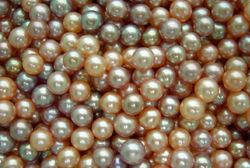 From modern Hangzhou, the capital of Zhejiang Province, to Zhuji took an hour by bus, but the ride seemed more like a hundred years. Workers marched alongside dirt roads with hoes hoisted over their shoulders, others carried water in twin bamboo pails lashed to a pole. Battered, barely motorized three-wheeled go-carts loudly puttered along. Women under conical straw hats sat on haunches in fields. Men using tree branches as whips urged on tired oxen pulling carts impossibly loaded down with stacked crates. A single ox deep in a field of dirt pulled what looked like an ancient plow. The only indication that Mao’s revolution had come was every once in a while a Chinese red flag with gold star in the upper left corner waved from atop a house or government building.

Small, satellite towns surrounding Zhuji are incubators for what is known as “lump economics,” the process of specializing in one particular niche product. Nearby Datang has the distinction of being the world’s biggest sock maker, manufacturing more than ten billion pairs a year. Diankow has become a hardware-manufacturing district. Fengqiao specializes in the manufacture of shirts. Sandu makes butter-soft pashminas every woman in the west seems to covet. Tens of thousands of peasants leave the countryside every year, flocking to these specialized factory districts, where jobs are waiting, along with dormitory housing and cafeteria meals. 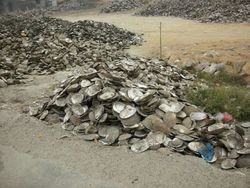 Zhuji is to pearls what Hershey, Pennsylvania, is to chocolate. As my bus got closer to downtown, I noticed more and more piles of discarded mussel shells alongside the road. The piles got taller and taller, one after another, until they weren’t piles any longer but continuous mountains of used shells lining the thoroughfare. Downtown, in the middle of a traffic circle, an imposing sculpture of three silvery sea nymphs beckoned visitors. Each Brobdingnagian nymph was kneeling on her right knee, her long luxuriant hair horizontally caught in mid-flight. In each nymph’s palm, lofted high above her head as an offering to the gods, was — what else? — a gigantic silver-colored pearl.

Early the next morning, China Pearl & Jewellery lieutenant Dave Bing drove me out to see a pearl farm. This was early March and the weather was brisk. Bing looked harried, nervously pushing back his black hair as we sped down a busy boulevard. We turned off onto a secondary street, then onto a gravel road that ran perpendicular to the first, driving four miles or so, until we stopped at a fenced gate. Bing nodded to a sentry, who pushed open the wide gate. We traversed a muddy road filled with potholes. The ride was so bumpy that, after a particularly deep pothole, Bing’s head and mine hit the van’s ceiling, and as we came down, our shoulders bumped against each other. “Too much rain,” Bing muttered under his breath. We crossed a narrow, rickety bridge. For another mile or two, we drove on a field rutted with tire marks. Finally, we parked on a steep, pitched grade overlooking a small lake filled with very dirty, almost black water.

I could see against a backdrop of purple fog and haze scores and scores of similar lakes, cut into the patchy Yangtze River Valley countryside. The lakes seemed to go on forever. Dotting the surface of each were tens of thousands of green plastic pop bottles bobbing up and down. It was a bizarre sight. Deep in rural China, as far as possible from anything Western, it seemed a 7-Up bottling plant had unloaded millions of green, liter-sized bottles that magically found themselves floating on the surfaces of a multitude of opaque lakes.

“Follow me,” Bing instructed. He took a machete from the pickup.

A small welcoming party awaited my arrival, and therein ensued all the requisite bowing that accompanied such occasions. As we finished with formalities, Bing asked me to choose whichever green bottle I fancied on the lake before us.

I did, pointing to a bottle thirty feet from the shore, which seemed off in its own world. A worker promptly got into a flat-bottom wooden boat and paddled over to the bottle.

“This one?” he shouted in Chinese. “This is the one you want?”

Within seconds, Bing was picking out glowing oblong things that looked like jellybeans. They were pearls, of course — purple, pink, lilac, white, and yellow. And they were shiny.  I couldn’t count how many Bing had scooped from the mussel, but he had at least fifty,

The worker promptly pulled up a muddy five-foot rope tethered on top by the green plastic bottle and on the bottom by a round wire basket. He cut the rope and dropped the basket onto the ribbed floor of his boat, then quickly paddled back to shore. Inside the basket were four large hard-shelled mussels, their halves shut tight. As the worker dumped out his haul, I noticed how different these mussels looked from oysters. They certainly were larger than any oyster I’d seen. And their shape. If I hadn’t known these gnarly-looking mollusks were mussels, I might have thought they were some kind of crustacean, maybe an exotic hard-shelled crab whose legs had retracted into its body. Bing lined up the four bivalves on the cement apron to the lake.

He asked me which I wanted him to open, and I pointed to the second one. It looked as ugly and as unprepossessing a thing as possible, even after Bing cleaned it off with a squirt of water from a hose. A circle of onlookers edged closer. 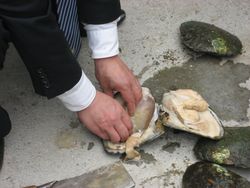 Bing wiggled the machete firmly inside the twin halves of the mussel. He lifted the machete and the attached mussel chest high. Then with a whomp, he slammed both down to the concrete, splitting apart the twin hemispheres.

What I saw first was an excess of flaccid, fleshy meat, oozing out of the split shells. The insides were markedly different from the gray translucent viscera of oysters. This stuff resembled pinkish-white fatty tissue, and it carried a foul odor. Bing quickly put down the machete, knelt, and pried open the twin halves. He grabbed the gooey innards of the mussel. Bing’s blue tie kept getting in the way, swinging back and forth, and out of frustration, he finally flipped the tie over his shoulder.

Within seconds, Bing was picking out from the mussel halves glowing oblong things that looked like jellybeans. They were pearls, of course — purple, pink, lilac, white, and yellow. And they were shiny. I had never before seen so many bright-colored, smooth-skinned nuggets come from anything. I couldn’t count how many Bing had scooped from the mussel, but he had at least fifty, and they weren’t small. They were longer than the pearls I’d seen come from oysters, and their shapes were more oblong than round. More squirts from a hose to clean off his treasures, and then Bing held out both his hands, cradling four dozen iridescent pearls. 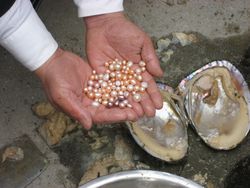 The circle of onlookers seemed pleased with my reaction. “Wow!” they said, nodding to each other, smiling widely, “Wow! Wow!” “Wow!” they mimicked in increasing volume. I guess “Wow!” was one of those universal words like “Okay!” that needs no translation.

“Pick one,” Bing offered majestically. I chose a pinkish-orange pearl, which I carefully picked from his open palm. I placed the pearl in the middle of my own flattened palm, as the sun had finally made its way through the morning haze. I marveled at its color, shin, lustre, and density. It was, at once, hard like a stone yet, in its own way, soft and vulnerable. Wow, indeed.

Posted by Virginia Postrel on January 26, 2010 in Books, Business, Jewelry