The Glamour Of Jihadi Terrorism 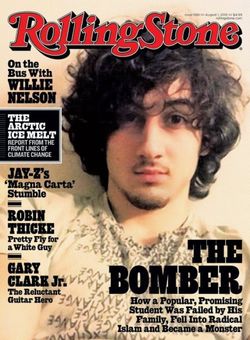 "The cover of Rolling Stone is meant for glorifying rock stars, icons, and heroes NOT murderers!" protested a typical reader in the article's online comments thread. Boston Mayor Thomas Menino decried the magazine for its "celebrity treatment" of Tsarnaev and for sending the "terrible message that destruction gains fame for killers and their 'causes.'"

Unfortunately, Islamist terrorism doesn't need Rolling Stone to make it glamorous. For the right audience, apparently including Tsarnaev, it already is. Understanding the nature of that glamour could offer clues to discouraging future terrorists. But first we have to acknowledge that terrorist glamour exists.

The novelist Salman Rushdie recognized the connection in a 2006 interview. "Terror is glamour--not only, but also," he said, arguing that many terrorists "are influenced by the misdirected image of a kind of magic ... The suicide bomber's imagination leads him to believe in a brilliant act of heroism, when in fact he is simply blowing himself up pointlessly and taking other people's lives."

The interviewer was flabbergasted, but Rushdie was correct. Glamour is about much more than celebrity, sex appeal or shiny dresses. It's a product of imagination--and a powerful form of persuasion.

Glamour gives its audience the feeling of "if only"--if only I could belong to that group, wear that dress, drive that car, date that person, live in that house. If only I could be like that. By embodying our longings in a specific image or idea, glamour convinces us, if only for a moment, that the life we yearn for exists. That dream can motivate real-world action, whether that means taking a resort vacation, moving to a new city, starting a band or planting a bomb with visions of martyrdom. What we find glamorous helps define who we are and who we may become.

Janet Reitman's Rolling Stone story on Tsarnaev points to several sources of glamour that have nothing to do with celebrity: the allure of military action, utopian causes and a lost homeland and identity. All these things speak to desires that go deeper than fame. "It is not uncommon for young Chechen men to romanticize jihad," Reitman writes, describing "abundant Chechen jihadist videos online" that show fighters from the Caucasus who "look like grizzled Navy SEALs, humping through the woods in camouflage and bandannas."

To be a jihadi warrior, these images suggest, is to be a man. Martial glamour is as ancient as Achilles. It promises prowess, courage, camaraderie and historical importance. It offers a way to matter. The West once recognized the pull of martial glamour--before the carnage of World War I, the glamour of battle was a common and positive phrase--but it ignores at its peril the spell's enduring draw, especially for those who feel powerless and insignificant.

Read the rest at Time.com.