The Leading Man: Hollywood And The Presidential Image, Featuring FDR And The Rage For Movie Presidents 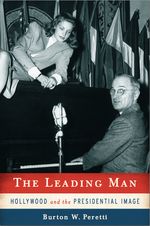 In the second of our excerpts from  The Leading Man: Hollywood and the Presidential Image

, historian Burton Peretti looks at how the relationship between the White House and movie stars intensified during Franklin Roosevelt's administration, leading to high-profile movie-star appearances and to more movies about past, present, and imaginary presidents. (Unlike Steven Spielberg, who held his new Lincoln movie until after the election, Hollywood during FDR's administration had no qualms about mixing past and present politics.)

The Great Depression and World War II intensified the escapist power of the movies and the voters’ tendency to search for idealized, cinematic, heroic traits in their elected leaders.

It is striking how much more visible Hollywood became in the Roosevelt White House. Movie stars, familiar to Americans from their appearances on theater screens, began to show up regularly at the White House during the Roosevelt administration. The main impetus was an annual event on behalf of a charitable organization founded by the president, the National Foundation for Infantile Paralysis (which later renamed itself after one of its fundraising efforts, the March of Dimes). While the public never received a clear account from the press of the extent of Roosevelt’s handicap, they were aware of his illness, and the novelty of having a president afflicted by polio intensified press coverage of the disease and efforts directed toward its prevention and cure.

As a result, in late January 1934 a small gathering of movie celebrities at a Washington hotel, hosted by the performer and humorist Will Rogers, celebrated Roosevelt’s birthday for the purpose of raising money for polio research. Hollywood publicists then concocted a plan to transport a larger group of well-known movie performers to Washington every year, beginning in 1935, in conjunction with the president’s birthday. The performers lunched at the White House with the First Lady and attended a variety of fundraising affairs around the capital. With the exception of young Ginger Rogers’s invitation in 1936 to witness the delivery of a Fireside Chat in the Oval Office, none of the participating actors met the president himself. FDR instead attended annual birthday dinners, which were held the same evenings as the movie stars’ lunches but were attended only by government officials. From 1935 to 1937, when Roosevelt was at the height of his popularity, the annual Washington birthday event inspired similar events on the same night in other cities, to raise money for the fight against polio.

argues, “it was Franklin Roosevelt who first perceived the power of association waiting to be harnessed in Hollywood stars.” This power of association was a deeply emotional bond connecting Roosevelt, his family, and more liberal members of his administration with their most fervent supporters in the movie industry. During Roosevelt’s terms, the unwritten but long-standing American taboo that barred star performers from partisan activism was often breached.

Hollywood’s increasingly central role in American political culture was also evident in the first significant depictions of U.S. presidents—fictional and real ones—in sound films. Not coincidentally, these depictions first appeared during the depths of the Depression, at the precise time the nation looked to Roosevelt for leadership. D. W. Griffith had presented Washington and Lincoln as supporting characters in his silent historical epics, and his first talking film was a Lincoln biography, but before 1932 Hollywood avoided depicting real or imagined presidents; politics, in the main, was not considered dramatic. The Depression steadily altered this view in a number of the popular arts, as exemplified by the groundbreaking musical comedy Of Thee I Sing (1931).

In Hollywood it was, perhaps not surprisingly, William Randolph Hearst who produced the first, fevered cinematic portrayal of the presidency. Gabriel over the White House (1932) has long fascinated critics and historians with its story about a weak president who is transformed by a blow to the head into a bold, quasi-dictatorial leader. Walter Huston (who had portrayed Lincoln for Griffith two years earlier) enacts Hearst’s own thwarted fantasy of a populist leader unbound by legalistic restrictions, free to confront the Great Depression and the threat of organized crime with paramilitary squads and government by decree.

As the Great Depression eased later in the decade, presidents in movies were portrayed in a more sentimental fashion. The avalanche of Lincoln lore, unleashed in the wake of Carl Sandburg’s very popular biography, epitomized the back-to-the-land sentimentality of the New Deal era. It was manifested in Hollywood in the late 1930s films Abe Lincoln in Illinois (from the play by Robert E. Sherwood, soon to become FDR’s speechwriter) and Young Mr. Lincoln, as well as Frank McGlynn Sr.’s supporting appearances as Lincoln in many films. More generally, the leading director Frank Capra developed a passion for contrasting homespun, Lincolnesque American goodness with ruthless corporate power in a series of celebrated films. The most overtly political of Capra’s films, Mr. Smith Goes to Washington (1939), was vaguely based on the story of Senator Burton Wheeler, who before his isolationist heyday had arrived in Washington from the Montana farmlands as progressive young crusader. Yet, as Michael Rogin and Kathleen Moran have shown, Mr. Smith muddled its political messages and obscured its ideology so completely that Capra—possibly by design—leaves the audience with only a vague yet powerful sense of pride in the little man. (Capra’s last political film, Meet John Doe [1941], is more pessimistic but equally opaque in its political orientation.)

Finally, there was FDR himself, whose representations in 1930s studio films still startle viewers today. The first FDR movie “appearance” occurred in the 1933 musical extravaganza Footlight Parade, in which the Broadway impresario James Cagney’s closing stage show “Shanghai Lil” evolves unexpectedly into a patriotic celebration of the New Deal (and the National Recovery Administration in particular). An audience onstage holds up cards to produce a large image of the president’s face, as martial band music explodes on the soundtrack. The scene is often considered an illustration of the fervent support of FDR by the brothers Warner, well known as the leading Democrats in Hollywood.

Darryl Zanuck at Twentieth Century Fox was another Roosevelt supporter, as was the director John Ford, and it was undoubtedly these men who ensured that the resettlement camp director in California in The Grapes of Wrath (1940)—the virtual savior of the Joad family, welcoming them smilingly to the clean and friendly camp at the end of their cross-country ordeal—resembles an ambulant FDR, down to his grin and eyeglasses. In wartime, Warners and Cagney revisited Roosevelt in Yankee Doodle Dandy (1942), an award-winning biography of the entertainer George M. Cohan, which begins with Cohan (played by Cagney) visiting the Oval Office and receiving warm praise from President Roosevelt (portrayed once again by a lookalike, but only shown reverently from the back). [Watch the scene here.] Zanuck then gambled the Fox studio’s assets on an expensive film biography of FDR’s mentor Woodrow Wilson, which explicitly endorsed the internationalism at the heart of American policy during World War II. These films collectively represented the apex of Hollywood’s favorable depiction of a sitting president and his goals.

Text from The Leading Man: Hollywood and the Presidential Image, by Burton W. Peretti, Rutgers University Press 2012 and used with permission. This is the second in a series. Read part 1 here.

Posted by Virginia Postrel on November 08, 2012 in History, Film, Politics