The Los Angeles Times Magazine is tucked into Sunday's paper, and since I don't subscribe, I had to fish it out of my neighborhood recycling bin.   Most of the contents are  on the website, but you have to search, which is less messy but more frustrating than my method.

The monthly magazine, edited by Annie Gilbar, is rather better looking than its predecessors, but it's still got some of the lamer features (Hollywood Rules, which is a sucking up piece by some sitcom actor ) and some new ones--My Best Story offers Henry Jaglom writing about  lunch with Orson Welles, Laraine Newman on date night with hubby,  a pet personal essay, and so on.   A soft-focus cover  story about organic beef ranching in Santa Barbara with the rancher's daughter who might be a friend of the assistant food editor, the aptly-named Amanda Bacon, gives us a peek at how rich people live. 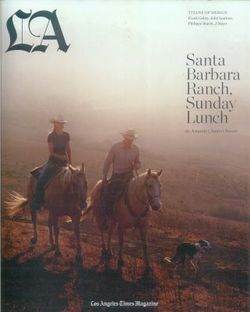 The divine Mayer Rus has a nice photo essay of merch, but he really needs a column. Or his own magazine. Not on the website, of course. Nor is a profile of Ford Motor's design VP, J Mays.  For some reason, the piece is written by Jonathan Schultz who lives in Brooklyn.

Editor Annie  has a terrific interview with  Frank Gehry, complete with wonderful photos of his buildings and models , but of course, you'll have to take my word on those, as there's no slide show.

All in all, I have to wonder if the dismal web presence isn't so much about luring subscribers with a pretty new toy, as about LAT staff editors and writers protecting their turf.  The Magazine isn't perfect by any means, but it's far more interesting than Image  or what's left of the Home and Garden section.