The Pleasure Of Double Entendres

While driving recently I heard The Who’s Mama’s Got a Squeeze Box on the radio and began reflecting on the pleasures of double entendres. This song has long been controversial. Some feel that the lyrics are straight-forward (about an accordion), while others feel it can be read two ways (the second involves sex). (There is also controversy about whether Peter Townshend wrote the song, or recorded a song that had been around for many years.) The live performance shown below argues for the double meaning.

We rely a great deal on double entendres in everyday communication. Understanding puns, irony, sarcasm, and much risqué humor depends on catching the double meaning or interpretation, and, when we do, we derive pleasure not only from “getting it,” but also from being an insider, someone capable of enjoying the double meaning.

Not everyone is comfortable with the idea that the meaning of a statement or a work of can be contingent on how it is interpreted. In The Scandal of Pleasure

Artistic meaning, like all meaning, is a matter of interpretation....Conservatives wrongly believe that a work of art has one universal, unmistakable meaning, which they are certain they understand.

Yet, for most of us, catching double entendres can be one of the great joys of language. In one sense, the poem by Robert Herrick given below can be read as simply being about seeing Julia wearing an attractive hairnet, and his desire to see her let her hair down. 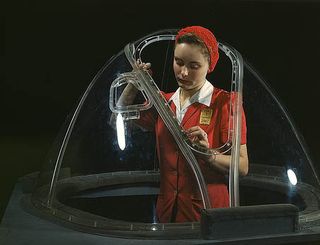 Upon Julia's hair, bundled up in a golden net.

Tell me, what needs those rich deceits,
These golden toils, and trammel-nets,
To take thine hairs when they are known
Already tame, and all thine own?
’Tis I am wild, and more then hairs
Deserve these meshes and those snares.
Set free thy tresses, let them flow
As airs do breathe, or winds do blow:
And let such curious net-works be
Less set for them, then spread for me.

Herrick was a 17th-century Anglican cleric, so Alfred T. Palmer’s glamorous WWII photograph of a woman working on the bombardier nose section of a B-17F navy bomber in Long Beach, CA is obviously anachronistic. But seeing how pretty she looks, with her hairnet matching her jacket, it is easy to understand Herrick’s desire to see Julia set her tresses free. Seeing her hair bundled up makes him long to see her let it down.

With Herrick, things are complicated. Julia was just one of Herrick’s many imaginary mistresses, though she was his favorite. Whether there was a real woman that inspired his Julia poems has long been debated. If Herrick saw a woman wearing a hairnet, it would have most likely been a snood, a hair covering that she perhaps wore to his church for modesty. The factory worker in the photograph is wearing a hairnet for safety, but the choice of color is clearly for adornment. And hair coverings can be both religiously modest and attractive. As Devorah declares about her head coverings, “modesty does not mean frumpy!” 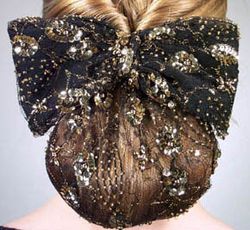 Indeed. Elaborate snoods such as this one from Melanie Moore Designs are sometimes worn with wedding gowns and other formal gowns.

Herrick was one of the Cavalier poets, a division that roughly divides the worldly poets from the metaphysical poets of 17th-century England. Herrick wrote religious poems, but they are far fewer in number and much less esteemed than his secular poems. Cavalier poems often made use of double coding.

“Hair” was one of these possibilities. Herrick’s contemporaries would likely have assumed that the above poem might also make sense if “hair” was sometimes taken to mean something more likely to be viewed in private than in public. In this case, doing so radically transforms the meaning of the final line. Which is the correct reading? Likewise, what is the purpose of the snood pictured here: modesty or adornment? Half the pleasure of double entrendres is going back and forth between the two possible readings.