The Velodrome: A Dying Luxury? 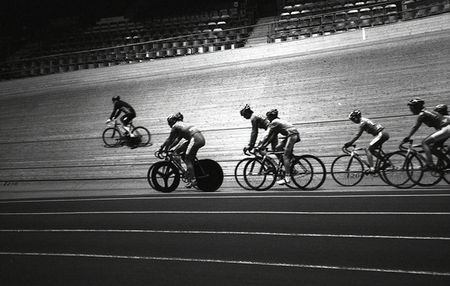 Last week I visited the Vienna Velodrome to take some photographs, and the experience was riveting. I have watched a few bicycle road races in the U.S. and in Europe, but they hardly prepared me for this magical place.

A velodrome is a stadium-like arena, where cyclists go round and round a wooden track at incredible speeds. Both professionals (members of a team) and amateurs can ride on the track. They need only to purchase a seasonal permit and to use a track bike—which can be rented at the velodrome if a cyclist does not have their own. A track bike differs from an ordinary road bike in the geometry of its construction and in the fact that it is “fixed gear.” The cyclist cannot coast and must pedal continuously in order to keep the bike in motion. As a sport, track cycling is extremely strenuous. As a viewing experience, its unique aesthetics are mesmerising. 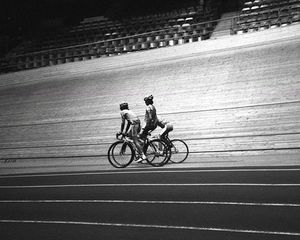 As I watched the bicycles fly past me, my eyes soon grew accustomed to the speed and I began to notice the beauty of the cyclists’ movements and postures. In road races, it is all about the destination, but at the track it is about repetition. And this repetition—the literal closing of a circle time and time again—creates the rhythm and grace of a choreographed dance. It is ballet, performed at 30 km/h. And it made me long to be one of the cyclists... despite that small hindrance of being athletically challenged.

With the popularity of cycling on the rise—and the urban “fixed gear” trend in particular—one might think that the romance of the velodrome should be attracting more followers than ever. But in fact the velodromes are dying. The enormous amount of endurance and self-discipline required to train to race on the track deters the urban fixed-gear enthusiasts, who prefer riding on the streets and participating in free-style “alley-cat” races. Underused, the velodrome is now perceived as an exotic indulgence—and many can no longer afford to stay operational. 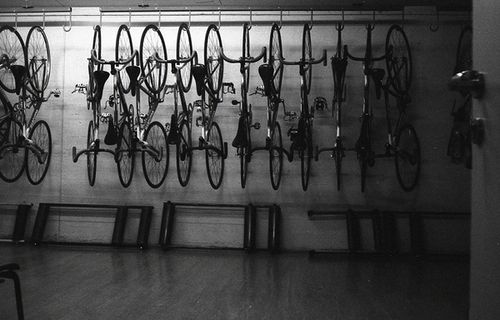 This, of course, raises the larger question of what determines whether a sport is perceived as “everyman’s pastime” versus a “luxury”: So much depends of the context of the time and place. Has the velodrome’s time run out, or will it persevere? I sincerely hope the latter.