The Glamour Of Battle 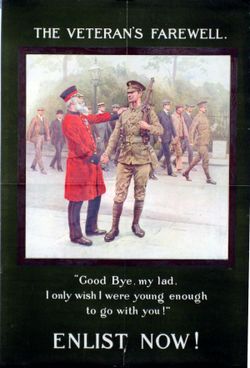 This British World War I poster, currently up for auction, repesents a calculated attempt to reinforce one of glamour's most ancient forms: martial glamour.

Though not himself a veteran, Frank Dadd, the illustrator, was from the generation portrayed by the old veteran in red. In a busy career, he painted many military scenes, whose accuracy was informed by his collection of arms and armor, but getting the clothes and equipment right isn't the same as portraying what a battle really looks like. (Not all Dadd's war pictures were so glamorous.)

The horrors of the Great War largely destroyed military glamour  in Britain. The Dadd family suffered along with the rest of the nation. Three of Frank Dadd's nephews were killed in the war, and another wounded. Dadd's own son survived physically but never recovered from shell shock.

Posted by Virginia Postrel on March 26, 2009 in Politics