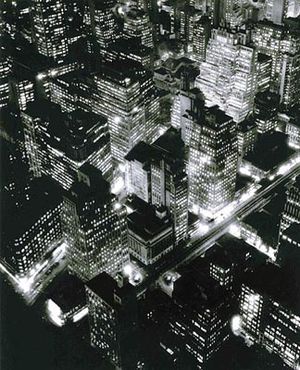 And New York is the most beautiful city in the world? It is not far from it. No urban night is like the night there.... Squares after squares of flame, set up and cut into the aether. Here is our poetry, for we have pulled down the stars to our will.

Taken in 1932, Berenice Abbott's "Nightview" is one of 60 iconic New York photos in this exhibition at the Monroe Gallery in Santa Fe. (Check out the link to see more.)

The exhibit's most glamorous shots are from the 1930s and '40s, when New York was the symbol of American modernity, and many of them are night views, with windows bright with promise. These aren't realistic photos of city streets but abstracted, suggestive portraits that spark the imagination.

In his brilliant book Celluloid Skyline: New York and the Movies

James Sanders points out that the New York of classic movies--the city of penthouses and jazz clubs--was a glamorous composite created by homesick New York writers exiled in Hollywood:

The city they were creating was not just the one they were remembering, however romantically. The writers were, after all, professional imaginers, and it was an imaginary city they were bringing into being. It would be animated not only by the memory of what once had happened there, but by all the things that could have happened, or should have happened. To memory was added imagination, and it would be these two potent faculties that would animate the dream city and give it special force and flavor....
If the real New York had many tall buildings, it had plenty of low ones as well, especially in its outer boroughs and residential districts. But the dream city would seem to be all vertical, every scene playing in a penthouse, on a terrace, in a rooftop nightclub, every window looking onto a view of rising towers.

Every scene. The mythic city, the dream city, the city of imagination is less a place of stories than a series of scenes--static shots into which the audience members can project their own longings. The glamour of the setting lingers in memory after the particulars of plots and characters fade, encouraging the audience to imagine their own stories in that glamorous version of Metropolis. 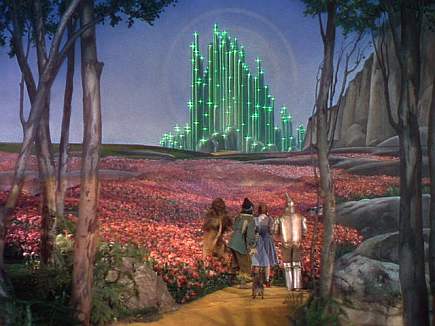 The most powerful cinematic image of the mythic city, Sanders suggests, is thus not a glamorized version of the real New York but a fully imaginary shot: the Emerald City of Oz.

Dorothy and her friends indeed stand transfixed—but not by aesthetic pleasure. In that gleaming skyline, they see the fulfillment of their dreams. In that place, perhaps only in that place, will each find the special thing he or she is looking for. These towers will somehow change their lives.
This is what makes the view so powerful, so moving. From a distance, the skyline is everything they could have imagined, and more. Soaring, glistening, grand but comprehensible, its upward leap precisely mirrors the feeling in their hearts. Its very improbability—all those slender, dizzying towers, bundled tightly together, cresting ad the center—simply adds to its impact. For how could their lives be truly transformed, after all, in a place of ordinary appearance? Magical events call for magical settings.
Through a kind of urban grace, the skyline of New York—in one sense simply the overscaled product of technology and real estate—became the locus of one of the most potent collective emotional experiences in the life of America. Into Manhattan’s towers were focused the hopes and dreams of millions, until the very girders and facades were permeated and charged with a sense of human possibility, as the skyline’s own skyward aspirations became fused with the personal yearnings of millions. The dream city, even in this most unworldly of guises, lets us share that transactive spark.