Veterans Day: How World War I Changed The Meaning Of "the Glamour Of Battle" 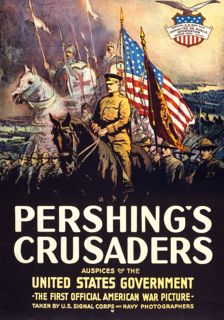 Military glamour is among the most ancient forms. From Achilles, David, and Alexander through knights, samurai, admirals, and airmen, warriors have been icons of masculine glamour, exemplifying courage, prowess, and patriotic significance.

In the half century leading up to the end of World War I, warfare was also one of the first contexts in which English speakers used the term glamour in its modern metaphorical sense. (The word originally meant a literal magic spell that made people see things that weren't there.)

“Military heroes who give up their lives in the flush and excitement and glamour of battle,” opined a U.S. congressman in 1885, “are sustained in the discharge of duty by the rush and conflict of physical forces, the hope of earthly glory and renown.” A 1917 handbook on army paperwork was “dedicated to the man behind the desk, the man who, being away from the din and glamor of battle, is usually denied popular favor, yet who clothes, feeds, pays, shelters, transports, and otherwise looks after the man behind the gun.” (Whether in warfare or business, logistics is the quintessential “unglamorous” but critical support activity.)

European nations began World War I with a glamorous vision of war, only to be psychologically shattered by the realities of the trenches. The experience changed the way people referred to the "glamour of battle," treating it no longer as a positive quality but as a dangerous illusion. In 1919, the British painter Paul Nash wrote that the purpose of The Menin Road, his bleak portrait of a desolate and blasted landscape, was “to rob war of the last shred of glory[,] the last shine of glamour.” Briefly conscripted in 1916, D. H. Lawrence lamented “this terrible glamour of camaraderie, which is the glamour of Homer and of all militarism.” An American writing in 1921 asked fellow veterans of the Great War, “Are you going to tell your children the truth about what you endured, or gild your reminiscences with glamour that will make them want to have a merry war experience of their own?” In the 1920s, pacifism, not battle, became glamorous.

In her ground-breaking 1939 book America at the Movies, Margaret Thorp recounted one example of the era's glamorous pacifism:

Deanna Durbin is a pacifist. She showed a reporter her school history book with a paragraph which she had underlined with red pencil. “It was Nicholas Murray Butler’s estimate that for the money spent on the World War every family in ten countries could have had a $2,500 house, $1,000 worth of furniture, several acres of land [and so on]. ‘Isn’t it dreadful?’ said Deanna. ‘Not so much the money, as the millions of people killed.’” Ten years ago such a statement would not have added to the glamour of a youthful star, but at least it is safely away from present conflicts.

Within a few years, Durbin was a favorite of British troops and reportedly of Winston Churchill as well. Just as World War I punctured the glamour of battle, the Nazi advance largely did away with the glamour of pacifism.

[Most of this text, except for discussion of Deanna Durbin and the glamour of pacifism, is taken from chapter one of my new book The Power of Glamour: Longing and the Art of Visual Persuasion. Pershing's Crusaders poster from Library of Congress.]

Posted by Virginia Postrel on November 11, 2013 in History