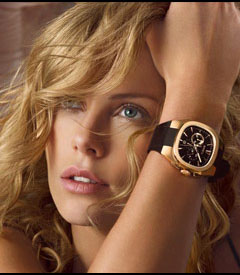 The world of men’s watch advertising is frequently about status. Accurate mechanical chronographs with many functions are expensive (four figures and up), and brands like Rolex, Omega, Breitling, and TAG Heuer make much of their long association with aviation, auto racing, and yachting. Their watches often have names like Yacht Master, Seamaster, and Speedmaster. Associations with famous athletes are common, such as Tiger Woods and TAG Heuer. Movado makes both stylish dress watches and sport chronographs, so it is not surprising that Tom Brady is used in their ads, given that he is both a star quarterback and the well-dressed husband of model Giselle Bunchen.

Breil also markets jewelry and fragrances, and in one of their ads a priest giving confession is overwhelmed by a young woman’s adornments. In their “Don't Touch My Breil” ads, eroticism grows more obvious. In one a photographer is more obsessed with his model’s watch than her. And in a spy fantasy a woman graphically demonstrates her prowess with a gun to warn him about touching her Breil.


Posted by Randall Shinn on May 25, 2009 in Advertising, Jewelry