What Retrosexuals And Metrosexuals Have In Common (Besides The Obvious Pun) 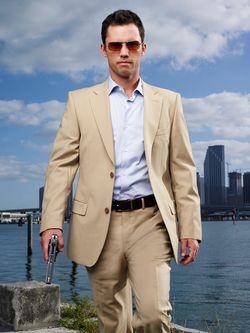 Writing in the Pittsburgh Tribune-Review, William Loeffler proclaims the end of the Metrosexual:

The man's man is back. And he's had enough of unisex salons, simpering emo music and the emasculating kryptonite of the Oprahsphere.

Or so say a spate of ads, books and websites that hail the emergence of the retrosexual, whose attitude and style hearken back to the strong, silent type of the '50s and early '60s.

The retrosexual keeps things simple. He does not own more hair and skin care products than his wife or girlfriend. He does not "accessorize."

Think Don Draper, the dapper, jut-jawed executive played by Jon Hamm in the AMC series "Mad Men." He may be a philanderer, but you won't find a pink shirt in his wardrobe. Like the dark hero characters of ex-spy Michael Westen in "Burn Notice" and U.S. Marshal Raylon Givens in "Justified," "Mad Men" presents alpha males who live unapologetically by their own code.

Loeffler's is the latest in a string of articles on the so-called Menaissance (see for instance this 2006 Boston Globe piece). What struck me, however, was the juxtaposition of Don Draper and Michael Westen (I've never seen Justified)--both exceedingly stylish figures. They may not own a lot of grooming products, but they do accessorize. Westen's sunglasses are, in fact, one of the show's signature props and have sparked much online discussion from viewers who want their own versions. (That'll be $400.)

The real contrast isn't between these guys and overgroomed Metrosexuals but between both groups, with their grown-up polish, and the beer-bellied American male in comfy shorts and untucked oversized shirt. On my recent trip to research glamour in Shanghai (more on that later), I talked with author and marketing consultant Paul French who, among many other interesting things, commented on why, with a few exceptions, American apparel lines haven't been terribly successful in Shanghai. U.S. companies are too attuned to the sloppy casualness of the American market, and Shanghainese like to look sharp. They want Banana Republic, he said, not The Gap--something that apparently escapes the parent company of both. (Instead of BR, there's a local knockoff called Urban Renewal.)

By way of illustration, French recounted what observed when two jet-lagged Americans came into the McDonald's where he and his 10-year-old son were having breakfast:

I noticed the Chinese were giggling at them. And then I looked at them. These guys were about my age. They’re in their 40s, right? And they had T-shirts, baseball caps, shorts, and then sort of sports shoes that looked like they had some tractor tires on the bottom of them. And I looked at them and then I looked my 10 year old who was not quite as casual as them.....If you put them on a bus and drove them around town, people would think they were retarded and going to the special place that they’re looked after for the day. I mean just isn’t it a shame? They never grew up mentality but they did physically.

No one would say that about either Michael Westen or Brad Pitt. What makes Retrosexuals seem manlier than Metrosexuals is their sprezzatura. They hide the artifice it takes to achieve their look. But the popularity of both models suggests that at least some American men want to escape the pressure to be sloppy.

Posted by Virginia Postrel on May 25, 2010 in Fashion, Retro Glamour, Television, Appearance, Grace