When Did Snow White Get So Dirty?

I don't know about where you live, but the teen pregnancy rate in Texas is appalling. Every 10 minutes a teen gives birth and a quarter of those births will be the teen mother's second child.

Now comes a study from the RAND research org that says, "Exposure to some forms of entertainment is a corrupting influence on children, leading teens who watch sexy programs into early pregnancies."

But, hey, I grew up on Dynasty and Dallas and my all-time fave ever Falcon Crest (those trumpets! The swelling score! Brilliance!) and I wasn't exactly gunning to have the high school quarterback's spawn. So what's changed?

Personally, I think what the study calls a "corrupting influence on children" is something that's pummeling little girls at a much earlier age than we really notice. Take Disney, for example. They have updated the look of their princesses and guess what? They ain't exactly spring blossoms anymore.

Look at the eyes (and mouths) of these modern princesses. In the 1937 classic Snow White, our protagonist's eyes were either innocently surprised or softly gazing. Today's Snow (and her cronies) now give a come-hither stare that I find more than a little disconcerting.

David Johnson writing for Inside Animation, notes that the 1930s Snow White had several different, subtle looks. Turns out the first artist to draw Snow White was a man named Ham Luske and his Snow had a very cartoony look to her.

"Her head was large for her body, as were her eyes, large almost round-shaped orbs... Other anatomical features were likewise over simplified...because Ham evidently saw her that way," Johnson writes. 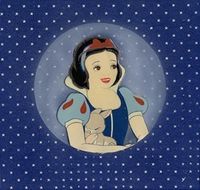 But drawing a cartoony Snow White didn't allow for the full range of emotions Walt Disney wanted, so Grim Natwick was brought in (these names!), the same guy who had created Betty Boop in 1930. Johnson says it was Grim who made Snow so fashionable "with a kind of thirties model face, with its plucked and highly-curved eyebrows." (FYI: Johnson says you can watch the change from cartoon in the first dwarf scenes to fashion plate to another, more lifelike girl at the end drawn by guy named Campbell. You can kind of see that here with these stamps of the movie.)

In addition to making Snow White fashionable, Grim also "began to absorb more and more of the actual live model" into his drawings, writes Johnson, who happened to be a 14-year-old girl named Marge Belcher, who was 16 when they finished filming. Take a look at that face--it's not exactly the childlike countenance Disney princesses have these days, is it?

Look at Snow White on the Disney Princess official website, Sure she's been hipped up a bit to fit into modern times and, apparently, that included her waistline--it's smaller than Barbie's! (Go download Snow White's wallpaper and then ask yourself, are the dwarfs even feeding her?) 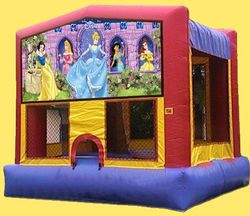 Look at the innocence of the 1937 Snow White. Compare that with the newest Disney movie out Tinkerbell (although, granted, Tink has always been sexy.) Disney used to use 14- to 16-year-old girls as their models. Now what are they using? I'm guessing 30-year-old strippers.

I give you exhibit A: something's definitely up with this bounce house. Look at the folds of Snow White's skirt. Is this for a child's party? And I wish I knew what diet she was on, because her breasts have certainly grown since the '30s.

So, look, maybe it's time to stop blaming Gossip Girl for all the world's woes and take a second look at those vixens that at one time seemed to be the harmless princesses next door.

Although that Chuck Bass, he is sure fun to hate.

[All images © Walt Disney, reproduced for direct commentary under fair use.]

Posted by Paige Phelps on November 12, 2008 in Film, Princesses, Children