Why Do People Hate Oscar Acceptance Speeches So Much? 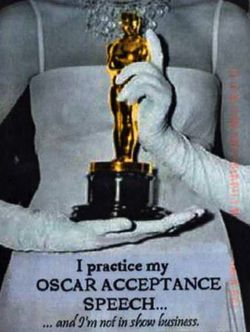 This image originally appeared on the site PostSecret.com, a crowdsourced art project that invites people to "Take a post card or two. Tell your secret anonymously. Stamp and mail the postcard." A half million postcards have been sent in since the project began in 2004.

The humor of this particular card comes from the unshocking nature of its confession. "I'd be lying if I haven't made a version of this speech before I was 8 years old and staring into the bathroom mirror," said Kate Winslet when she won Best Actress last year. "And this would have been a shampoo bottle." In response, someone started a Facebook group called Thanks a lot Kate Winslet for stealing my oscar speech. In 2008, Dove even made a commercial about practicing your Oscar speech in the shower. "Everyone Has an Oscar Acceptance Speech," observes John Scalzi in a funny piece about temporarily having a real Oscar in his house. As the postcard says, you don't have to be in show business to have this fantasy.

The Oscar speech is a touchstone glamorous moment: You're being recognized as special in front of the whole world. (If you're a woman, you're also wearing a great dress, but that's a minor fantasy compared to the acclaim.) But, with a few exceptions, real-life Oscar speeches are disappointing. In fact, audiences tend to hate them. In a great 1999 rant Sharon Waxman called the typical speech "a waste of the rapt attention of much of the Western world."

Please! Is it too much to ask? A little humor? A little pathos? Histrionics are fine, even hubris is welcome – as long as it's different. Rod Steiger thanked the Maharishi. Fine. Vanessa Redgrave scored the "Zionist hoodlums." Whatever. Anything, anything, ANYTHING but thanking your agent.

Who can forget director James Cameron declaring, "I am the king of the world!" last year, right after requesting a moment of silence for the victims of "Titanic." Sure, we thought he was a jerk, but at least it was more interesting than listening to his co-producer Jon Landau reel off an endless list of names we'd never heard.

The problem  that the glamour of winning an Oscar is all about individual triumph--the recognition of one particular person--but social convention dictates that winners act humble and dependent. That (faux) humility destroys the glamour of the moment. Thanking your supportive family can still be glamorous, but a long list of backstage players breaks the fantasy of the autonomous star. It forces the audience to contemplate the mundane, even bureaucratic, processes behind the achievement.

One way to preserve social convention while preserving some magic is to replace glamour--the idealized moment--with romance, a narrative of struggle and triumph. That may be just the story of getting the movie made or it may be a greater historical narrative, like the story of African Americans in Hollywood. Or, like Mo'Nique, you can go for both.