TSA Screeners Get New Uniforms; All Else Remains The Same 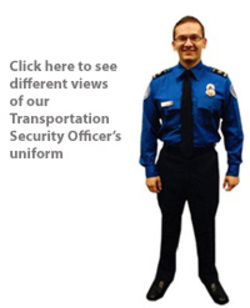 The goal is to give screeners a more professional appearance and establish a greater air of authority, in an effort to command respect from travelers.

Amy Alkon is skeptical. Personally, I think that while clothes maketh the man, the man (or rather The Man) had better be able to back it up. While working for A Current Affair, I got pulled out of line on a regular basis. My least favorite encounter was the Salt Lake City granny who hand-inspected my La Perla underwire bra--while I was wearing it. Traveling with a press pass and a Fox News ID card, I felt that somehow I'd be the least likely terrorist on the flight, but she explained that she had to consider the possibility while waving through multiple wives in prairie skirts and a woman in a burqua. Point taken--or maybe she just really loved lingerie.

The TSA site show off the new duds with a virtual model named Spinning Jeremy, who's equipped with a high-quality tie. I feel safer already.

Posted by KateC on September 12, 2008 in Fashion, Current Affairs