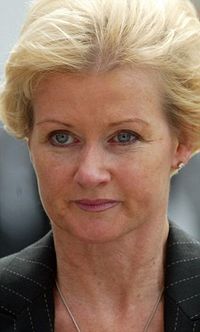 Ireland is enjoying a a criminal trial that's  right out of film noir.  Sharon Collins wanted to get rid of her boyfriend and his sons, in order to inherit the family business, worth some €60m.  So, she sat down at the keyboard, typed in Hitmanforhire and found Tony Luciano, aka Essam Eid, an Egyptian-born poker dealer who was up for some fast cash.  She wired him a down payment and he flew from Vegas to Ireland.

Eid ended up trying to make a deal with his intended target, and that's what got him arrested.  You just can't trust some people--especially those you meet online.

Honestly--don't these people have any sense? Who picks such an email addy? And is Yahoo! complicit in allowing such a moniker?  And is Hitman for Hire like Yelp? Are there consumer ratings?

Of course, Howard, the poor dumb sap, is pleading for mercy for his Sharon.  Collins, who's facing six years in prison, has other plans:

It has been reported that Collins has secured the help of a Los Angeles-based literary agent, after she told Ireland's director of public prosecutions: "I'll write a book yet".

Posted by KateC on November 04, 2008 in Mystery, Current Affairs