Hero Honda Glamour--Ride One And Know What Women Want

The Hero Honda Glamour is a trendy motorbike, marketed to the young Indian urban hipster.

In this commercial, the handsome guy on the bike has developed magical powers--he can read  women's minds. Debraj Mookerjee translates the ad. My favorite part is

He rides past an attractive young mother standing by the kerb with her two children. She pushes them behind her even as he hears her thoughts, “They are my sister’s girls”.

Posted by KateCoe on January 31, 2009 in Automobiles, Advertising 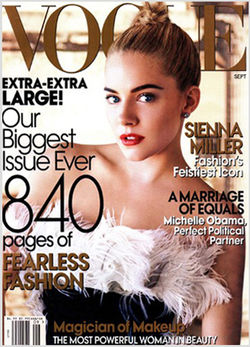 Amy Alkon points out that the spirit of Emily Latella is with us yet.  Steven Waldman, blogging at Belief.net, worked up a good lather over Vogue's insidious use of Photoshop:

Apparently, Vogue took Siena Miller's head and stuck it on someone else's body (presumably because Miller's actual body was so grotesque).

But they didn't. Vogue stuck Miller's head on her own body. Two different photos, composited.

Here's where the fun really begins. Waldman links to a Huffington Post story about the new documentary, The September Issue.  Danny Shea writes:

"The September Issue," the new documentary about Vogue which screened at Sundance, has unearthed its first juicy tidbit: the magazine photoshopped Sienna Miller's head onto a different photo of her body.

Did Waldman actually read the piece or did he just find the headline and slam in a link?  Must have, since he can't spell her name correctly.   He gets pretty righteous about all this "visual lying":

Is this a victimless crime? I don't think so. Each girl or woman who models themselves after ever-more unrealistic notions of beauty -- and dislike themselves when they don't reach that standard -- suffer from these lies.

Yes, and Wonderbras, Miss Clairol, tinted contacts, and Spanx are just as guilty, I'm sure. Get a grip, dude. (Is it weird that Belief.net has an ad for California Psychics.com?)

Speaking of Photoshop, Waldman might want to rethink his own headshot.

Posted by KateCoe on January 31, 2009 in Magazines

Do I Look Hot In This Dress? 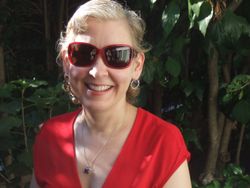 Like Jill Biden and Nancy Reagan, I am fond of wearing red. Now University of Rochester psychologists say that makes me more attractive to men.

Like too much psychology research, their conclusions rely on experiments with tiny samples of college students, but it is suggestive.

Posted by Virginia Postrel on January 30, 2009 in Fashion 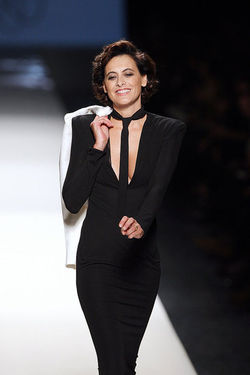 As the voluptuous 51-year-old strutted down the runway, the crowd cheered this one-time French queen of the catwalk.

And the commenters go wild.  She's great looking but not voluptuous  anywhere but the starved-to-near-perfection world of couture.

If you look carefully, you can see the jet-trail she's leaving. Talk about smokin'!

These photos are from a photo shoot by Toni Frissell, whose photos of the Tuskegee Airmen are featuredin the post below. One picture was used in an advertisement for a Washington, DC, department store, but the whole session is in the Frissell archive at the Library of Congress. Representing only a small selection of the whole shoot, these photos demonstrate how a photographer experiments with lighting and composition to achieve a result.

Frissell presumably had constraints (notably showing the dress) other than evoking glamour. But suppose that was the sole goal. Which photo do you find most glamorous, and why? I'll comment in a later post, but let's hear from you in the comments. (As always, click on the photo to see a larger version.) 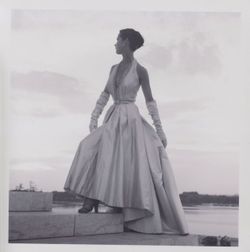 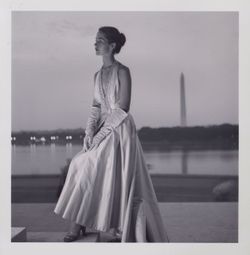 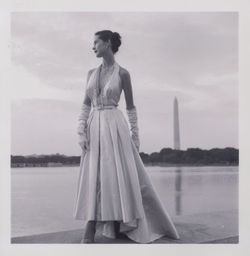 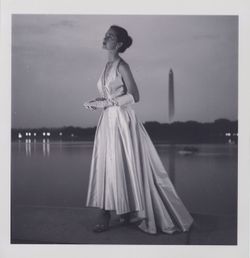 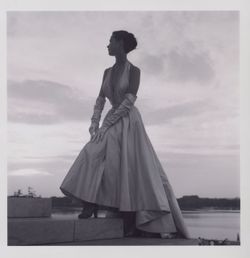 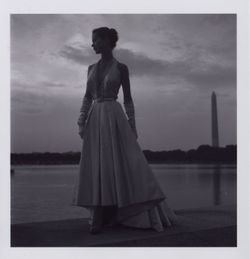 Posted by Virginia Postrel on January 30, 2009 in Photography

By this time next year, women all over the country might be pretending it's 1962, if Mad Men costume designer Janie Bryant has her way.  She told Glamour that there might be a fashion deal in the works

I'm working on some things right now ... I hate to be so mysterious but I can't really say! It would have my name attached to it though.

If it's half as brilliant as Dyna Moe's paper dolls, we're in for a treat, in a pointy-bra, spike heeled way. Which is pretty much always a treat, according to men. 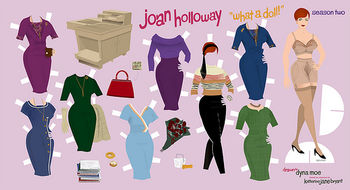 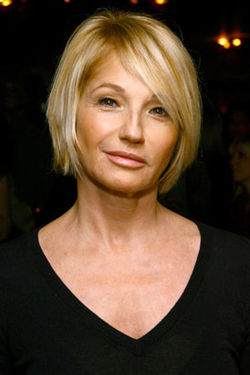 According to Page Six, movie star/trophy wife/waterglass warrior Ellen Barkin will executive produce and star in a pilot  for HBO. Somehow, execs there set aside thinking "out of the box" and decided that Barkin's considerable talents are best used by having her play herself. The premise:

A woman, "famous for her high-profile marriage, who divorces and re-enters the singles market"

And who better to help navigate these waters? Shauna Cross, writer of the novel Derby Girl and subsequent movie,  Whip It, starring Drew Barrymore. Writers fall in and out of fashion faster than Opi polish colors, and Cross can't be blamed for taking everything that comes her way. (Diablo Cody is busy, thanks.)  No doubt, dating in Manhattan is like roller derby.

Seasoned actresses  are be grateful for small favors, though, and the idea of a woman over 50 on TV who's not clutching a dish towel is a reason to rejoice.  Barkin's best when she's a sort of updated Lauren Bacall, all low tones and tawny tresses, but she's got an edge like cracked concrete. Seems a pity to waste her on a character who's all too reminiscent of Sex in the City, Lipstick Jungle, Cashmere Mafia et al.

I'd rather see her as--oh I don't know--the tough head of an interstate trucking company (High Heels and 18 Wheels) or an ex-wife of an outed politician (Arianna McGreevey!), or a much-loved symbol of a beleagured food conglomerate (Mrs. Butterworth Fights Back) or the widow of a rock idol, fighting his kids for  his musical legacy (Priscilla vs. the Love Kids). Anything but a woman dating.

Posted by KateCoe on January 30, 2009 in Television 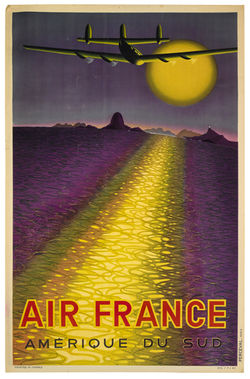 This evocative 1945 poster, up for auction by Swann Galleries on February 5, is by Victor Vasarely, who later became famous as the father of Op-Art.

Although the words promote Air France flights to South America, nothing other than the (presumably) westerly direction of the plane suggests that destination. Unlike many vintage travel posters, this one contains no short-hand emblems of a colorful and exotic destination.

It's a timeless, placeless image capturing the glamour of escape.

Posted by Virginia Postrel on January 28, 2009 in Advertising, Art, Travel

Elyse Sewell And The Year Of The Ox

If you're celebrating the Year of the Ox, you can pick up some tips from ANTM cycle 1's Elyse Sewell. While living and modeling in Shanghai, Sewell made this video. She's equally adept on either side of the camera, and is probably the most successful model to live through the series. Certainly one of my favorite reality show contestants. Her advice for 2009?

The Financial Times My Favorite Home features the dwelling places of the great, the good, and the interesting.  I'm not sure which category Fran Rubel Kuzui falls into.  Kuzui and her husband Kaz Kuzui discovered Joss Whedon and his script for Buffy, the Vampire Slayer.  She directed the feature film  and through good luck and/or astute management has been receiving executive producer credits for the TV franchise and  compensation, no doubt, ever since.  The audience at Whedonesque isn't exactly enchanted by the interview, but hey, that's show biz.  Some people think she's neat.

Her interview is a tich precious for my taste. As DG is a snark-free zone,  I'll refrain from commenting on her latest plans:

I’ve decided to direct one more film and have just finished the screenplay.