Why Do They Call It The Kelly Bag? 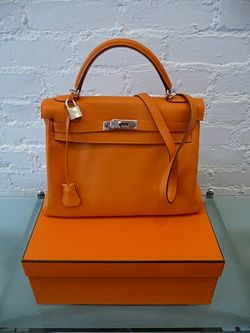 This Kelly bag in Hermès orange is for sale at Decades Inc., the high-end vintage boutique beloved of Hollywood stars and the stylists who dress them. According to the Decades blog, this particular model retails for $9,000 but is available for an undisclosed "below retail" sum. (If you have to ask, you can't afford it.)

The bag got its name when Life ran a photo of Princess Grace, then pregnant with her daughter Caroline, using it to disguise her pregnancy from paparazzi. With its dated combination of large size and short straps, the bag is a holdover from the days of perfectly polished ladies in white gloves who'd never think of flaunting their “bumps.” Yet it’s still considered a timeless classic. Why?

. It’s rare and expensive. It flaunts its owner’s wealth in a subtle and unapologetic way. But it’s also tough and more adaptable than it initially appears. If Lisa does wind up tramping through the jungle with her true love, the Kelly bag is the sort of purse she might take with her.

The practical effect of this combination of rarity, expense, and toughness is that people can justify spending outrageous amounts on a purse, knowing that it will last indefinitely. It won’t go out of style, because it wasn’t really in style to begin with, and Hermès will refurbish it on request. The per-use cost thus drops substantially, plus there’s a secondary market in case you need the cash.

Note that it’s called the Kelly bag, even though Grace was married when the name was coined. It’s not associated with royalty but with Kelly’s on-screen persona.

Posted by Virginia Postrel on January 12, 2011 in Fashion, Film

TJX And Out Of The Closet Give Kidney Teens A Dose Of Prom-Dress Glamour...Plus, Videographer Wanted 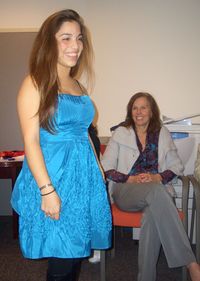 Last week Southern California teens with chronic kidney disease had a chance to experience one of the joys of prom season: picking out the perfect dress. 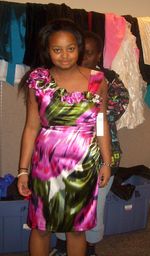 In preparation for next Sunday's Renal Teen Prom (see earlier post here), volunteers from the Renal Support Network fanned out around Southern California, bringing donated prom dresses to hospitals and dialysis centers. They set up makeshift dresing rooms in any available space, from exam rooms to restrooms to janitor's closets, allowing delighted girls to browse and try on dresses (with advice and assistance from assorted moms).

This year's prom dress selection was better than ever, thanks to donations from DG friends at TJX (TJ Maxx/Marshall's) and Out of the Closet. TJX rushed their dresses overnight so they could arrive in time to become the caravan's most popular items when it hit Millers Children's Hospital in Long Beach, where RSN volunteer Robert Ziegler took these photos.

RSN accepts dress donations year-round. You can send them directly to 1311 N. Maryland Avenue, Glendale, CA 91207 or, if you prefer, drop them off with DG friend Marina, owner of the fantastic First Class Tailors in Brentwood. You can also make a financial contribution via PayPal--$50 sends one teen to the prom. 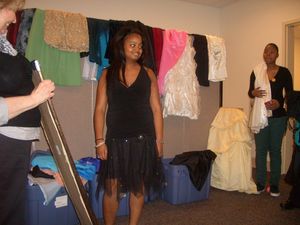 The prom could still use a volunteer videographer who can work next Sunday evening, January 16, at Notre Dame High School in Sherman Oaks. For more information, please contact RSN directly or leave a comment below.

Posted by Virginia Postrel on January 09, 2011 in Fashion 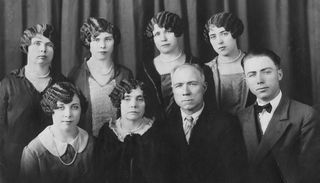 Someday someone may see a picture of you and likely smile or laugh when they realize that you were wearing your hair in the fashion of the age, most likely inspired by your favorite actor or singer. I offer as evidence this picture of my maternal great-grandfather and great-grandmother and their children. All of the women are wearing the 1920s-fashionable Marcel wave. With the string of pearls all of them probably felt as up-to-date as film star Mary Pickford, shown below with the same look (except that Mary smiles and dares to bare her shoulders). My grandfather, the only male offspring, has his hair slicked back in the fashion of Rudolph Valentino.

Looking at high-school and college yearbooks from a few decades gives us the perspective to see just how conformist we sometimes can be. My wife laughs when she sees that most of her friends were wearing the same hair style that she was. Many of the boys in my high school wore some version of Elvis Presley’s or James Dean’s hair, hoping somehow that their charisma would magically transfer to us. 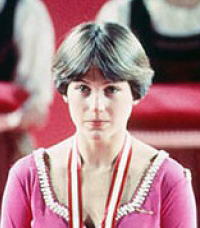 Tina Fey has admitted having a girl crush on Dorothy Hamill (shown here receiving an Olympic skating medal). Fey got a Hamill-style haircut, plus wore a big Dorothy Hamill button. Hamill’s wedge cut flowed so beautifully when she skated that some commentators have lamented the lack of something similar at the last Winter Olympics.

How about DG readers? What actor, singer, or athlete had the glamorous hair that you and many classmates aspired to? For inspiration, here’s a site showing many 20th-century hairstyles, and another showing 10 of the most popular hairstyles.

Posted by Randall Shinn on January 07, 2011 in Fashion, Appearance, Celebrities