How To Save The Oscars: The Right Host Won't Fix The Show

As the "trailer" above suggests, the traditional way of trying to fix the Oscar show involves finding the perfect host. But Billy Crystal won't save a show that doesn't give the audience much of a rooting interest. In my latest Bloomberg column, I look at some more-radical ideas for saving the Oscars from their long-term ratings decline. Here's the opening:

True, Whitney Houston’s death the day before boosted Grammy viewership to more than 39 million. But that’s only part of the equation. The Oscar ceremony is gradually losing viewers.

The downturn isn’t inevitable. American TV viewers love competitions. “American Idol,” “Dancing With the Stars,” and football account for eight of the top 10 regularly scheduled programs. This year’s Super Bowl was the most-watched TV show in U.S. history, with 111.3 million viewers, beating the record set by the 2011 game.

Although TV audiences may be fragmenting, live events where fans have a rooting interest are still major draws. They give people something to argue about. They engage viewers’ passions. They create must-see TV.

So the Oscar telecast has great potential. At No. 9, it was still the only non-sports program to rank in last year’s top 10. (It ranked 10th among younger viewers, ages 18 to 49 -- another bad sign.) But the usual approach of looking for the perfect emcee and tweaking the live performances -- this year’s show promises a one-time-only Cirque du Soleil act -- won’t stop the decline. The Oscars are about the movies, not podium jokes and stage spectaculars. Generating audience enthusiasm requires more radical steps. Here are a few ideas for the Academy of Motion Picture Arts & Sciences, all designed to engage moviegoers’ interests without sacrificing Oscar voters’ independent critical judgment.

1) Split the Best Picture category into two, based on the number of tickets sold.

Posted by Virginia Postrel on February 24, 2012 in Film

Photographer Lillian Bassman On Glamour: "I Project What I'm Not. What I Would Like To Be."

The great fashion photographer Lillian Bassman has died at the age of 94. Here's the NYT obituary of this extraordinary woman. Here's a selection of her work from the Peter Fetterman Gallery. The clip above, from which I took the title quote for this post, is from a documentary on her life and work. You can see the full documentary, which lasts about 28 minutes (in two parts), and comments from Fetterman and Bassman's daughter, photographer Lizzie Himmel, here.

Posted by Virginia Postrel on February 14, 2012 in Fashion, Photography

Renaissance Portraits At The Met: Self-Image And The Public Face 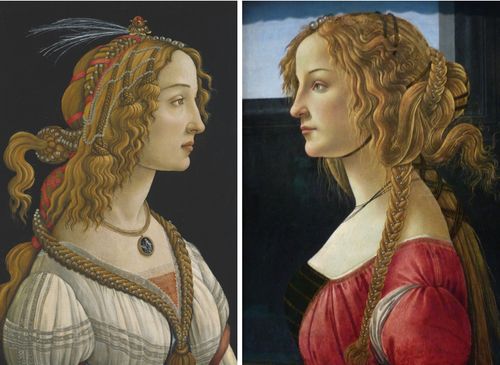 The Metropolitan Museum of Art has mounted an extraordinary exhibit called The Renaissance Portrait from Donatello to Bellini, which includes paintings, sculptures, medals, and preparatory drawings that are rarely if ever seen together. I was lured to the December press preview by the chance to see Botticelli's idealized portraits of Simonetta Vespucci (above) without a trip to Berlin. (I've previously discussed the right-facing portrait's resemblance to a certain contemporary star.) They are indeed spectacular. 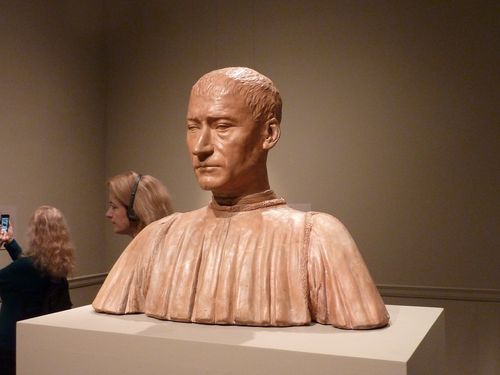 But the most impressive display was the side-by-side comparison of two busts of Filippo Strozzi by Benedetto da Maiano: the terracotta study done from life, above, and the final marble version, below. 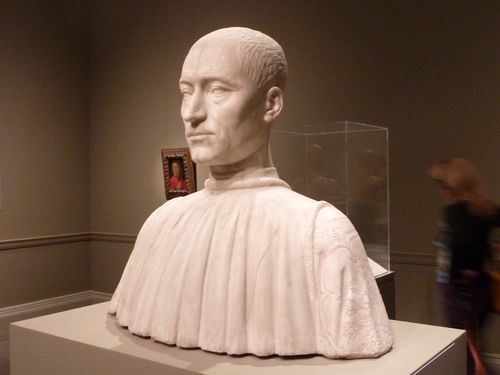 The two busts are the same, yet different: a portrait before and after subtle retouching. In the marble bust, da Maiano not only makes Strozzi looks less tired and absent but also changes the tilt of his head, giving him a nobler mien. He looks like a leader. 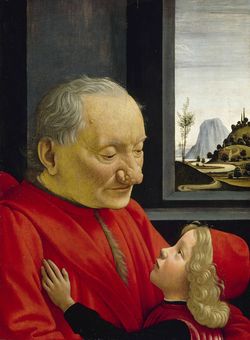 We've gotten so used to thinking about retouching as something done with pixels and Photoshop that we often forget not only how important it was to early glamour photographers like George Hurrell but also how unusual the ideal of non-idealized images was throughout most of western history. Until the rise of what historians of science Lorraine Daston and Peter Galison call the ideal of "mechanical objectivity," there would have been no question that a portrait should follow the Aristotelian ideal of producing a “likeness which is true to life and yet more beautiful.”

This dictum applied more universally than we tend to think. In The Patron's Payoff

, Jonathan Nelson and Richard Zeckhauser note that “though many praise Ghirlandaio’s Portrait of an Old Man for its 'realism,' the bulbous growth on the patron’s nose was even more prominent in the preparatory drawing.” You can see the final, glamorized version, which is in the Met exhibit, above.

As traditionally conceived, portraits are not like snapshots (most of which aren't that candid either). They're designed to present a public face. Within the constraints of likeness, they represent the persona the subject wishes to appear—assuming that the subject is the one commissioning the portrait. In The Pleasures of the Imagination: English Culture in the Eighteenth Century

, John Brewer discusses some of the dilemmas facing 18th-century portrait painters, whose clients could refuse to pay if they didn't like the results.“The trick,” writes Brewer, “was to understand how the portrait should be presented. Usually the client had a sense of how he wanted the sitter to appear. Part of a good portraitist's skill lay in discerning this; otherwise the commission could go disastrously wrong.”

For instance, Jean-Ãtienne Liotard, who specialized in miniatures, was too realistic for his clients' tastes. (Here's a nice example of his work.) “His likenesses were very strong,” a contemporary said, “and too like [i.e., accurate] to please those who sat for him; thus he had great employment the first year and very little the second.” Ozias Humphry ran into a different sort of conflict when he was hired by a man who wanted a portrait of his wife. The wife, naturally, wanted to look young and attractive. Humphry complied—and infuriated his paying customer. “You have forgot that she is between 30 and 40,” he wrote to Humphry, “and that I am 70, and that the character of a smirking Girl is very unfit for her situation, as I should have liked to have made her of more Importance, and I find some of my friends ridicule me upon it.”

When I read that I thought of my official Bloomberg portrait. In real life, I look more or less like the photo on the left, which is a candid of me accepting the Bastiat Prize. (I'm well lit and well coiffed.) The middle photo is the one I use most of the time as my “official” portrait and is, except for reversing the hands, a characteristic post. (My hair no longer has those post-chemo curls.) The one on the right is my Bloomberg photo, for which I had professional hair and makeup and unknown amounts of retouching. But, most important, the photographer refused to let me smile. No “smirking Girls” at Bloomberg View! (For another contrast, check out Amity Shlaes at Bloomberg View, in a candid lecture shot, and on her own website.) The expression isn't my resting or serious face either; it's more attractive. So the picture looks like I'm an actress playing someone else—the same physiognomy but a different personality.

For more on Nelson and Zeckhauser's work on image building by Florentine patrons, including Strozzi, see my article here. The Met exhibit will be on through March 18. If you can't make it in person, you might want to get the gorgeous catalog

[Botticelli's Ideal Portrait of a Lady (right-facing image) and Ghirlandaio's Portrait of an Old Man courtesy of the Metropolitan Museum of Art. Other exhibit photos by Virginia Postrel and permission is granted to reproduce these photos with a link back to this post.] 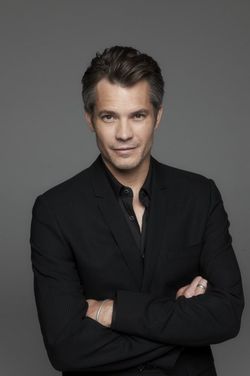 Many women (including my wife) enthusiastically agree that actor Timothy Olyphant is incredibly hot. As Marshall Raylan Givens in FX channel’s Justified, he is as dangerous as a heart-throb as he is with a gun.

When portraying Marshall Givens in dangerous situations, Olyphant uses his eyes and sly smile to convey the feeling that Givens is coolly sizing up the opposition. Marshall Givens usually seems less prone to rage than the sheriff Olyphant played in Deadwood. Nonetheless, Olyphant makes us feel that Marshall Givens will kill without a moments hesitation, if justified. And since Justified is set in a contemporary rural Kentucky environment filled with dangerous criminals, guns, and drugs, Givens’s expertise with a handgun does frequently come into play. 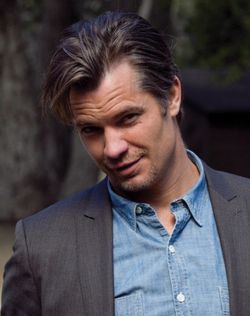 A number of things seems to make Olyphant particularly attractive to women. He is tall and lean-muscled, with a body like a fashion model. He is boyishly handsome, with a lush head of hair. As Marshall Givens, Olyphant’s intense, dark-eyes sometimes narrow into threatening slits as he looks out from under his cowboy hat. But a sideways glance from those dark eyes, combined with a sly smile, seems to make many of his female fans go weak in the knees.

Olyphant has been talked about as one of the new male actors who have a notable flair with style. GQ magazine recently named his Raylan Givens character as the most stylish man on TV (their site has a great photo of Olyphant in costume). In a December 2011 GQ article Sarah Goldstein wrote that even some men have crushes on Marshall Givens. And Olyphant himself admits that he enjoys playing a badass character like Raylan.