Andy Warhol, the Sexual Revolution, and the End of Marriage Glamour

In 1975, Andy Warhol praised the sexual revolution for destroying the glamour of marriage:

I love every "lib" movement there is, because after the "lib" the things that were always a mystique become understandable and boring, and then nobody has to feel left out if they're not part of what is happening. For instance, single people looking for husbands and wives used to feel left out because the image marriage had in the old days was so wonderful. Jane Wyatt and Robert Young. Nick and Nora Charles. Ethel and Fred Mertz. Dagwood and Blondie.

Being married looked so wonderful that life didn't seem livable if you weren't lucky enough to have a husband or wife. To the singles, marriage seemed beautiful, the trappings seemed wonderful, and the sex was always implied to be automatically great--no one could ever seem to find words to describe it because "you had to be there" to know how good it was. It was almost like a conspiracy on the part of the married people not to let it out how it wasn't necessarily completely wonderful to be married and having sex; they could have taken a load off the single people's minds if they'd just been candid.

But it was always a fairly well-kept secret that if you were married to somebody you didn't have enough room in bed and might have to face bad breath in the morning.

The drive for gay marriage represents the end of the sexual revolution. Marriage lost its glamour. It lost its connection to sex. Divorce got so easy that "single mom" became a sympathetic political trope. Cohabitation became normal. Nowadays, nobody--least of all gays--has to get married to be a respectable member of society. And yet people want to get married. They want to bind themselves to be monogamous. They want to promise in public to face bad breath in the morning. That's pretty remarkable.

The LA County Museum of Art has given $900,000 to a political campaign backing a local initiative that would increase the sales tax by 0.25% to fund transit projects, primarily the oh-so-glamorous Subway to the Sea. I don't understand how a nonprofit can legally spend this much money on political contributions, but I assume there must be a way. The museum's mission is:

To serve the public through the collection, conservation, exhibition, and interpretation of significant works of art from a broad range of cultures and historical periods, and through the translation of these collections into meaningful educational, aesthetic, intellectual, and cultural experiences for the widest array of audiences.

Nothing about subways, even ones that stop nearby.

After my post on the South Pasadena ads, Larry Riesenbach of the Pop Luck Club, a group of L.A.-area gay fathers forwarded me this YouTube ad and an email from its creator, William Lucas Walker:

As many of you know, Kelly and I were married on June 17, after nine happy years together. Next to the births of our children, it was the most joyful day of our lives. For our 7-year-old daughter Elizabeth, it was the high-point of our family's life. She was bursting with pride all summer. Until she heard about Proposition 8.

Our most compelling reason for choosing marriage had less to do with romance than with the benefits marriage would provide our kids. Not just the many legal protections marriage automatically confers on children, but the more real, everyday benefit of knowing that their family is equal, not in some different, lesser legal category than all their friends' families.

In the May 15 Supreme Court decision that lifted the ban on marriage, the word "family" is invoked over 70 times. A careful reading of that document reveals that families like ours were the main reason the judges came to the decision that a ban on marriage violated the California Constitution's equal protection clause. The Court recognized that by denying our families equal access to marriage, we would always be separate and never equal.

As I mentioned, our daughter is upset about Proposition 8. The other day we passed a newspaper stand that had a "Yes on Proposition 8" bumper sticker on it. She became visibly agitated, as she has recently whenever she sees one of the ubiquitous "Yes on 8" yard signs. She asked if I would stop the car so we could take down the bumper sticker. I explained to her that there's a thing called freedom of speech in our country, and that everyone has the right to express their opinion, as long as they're not hurting anyone. She said, "But they are. They're hurting our family. Why would anybody want to do that?" Try answering that one.

So I made the video. As you've probably read, polls show both the pro and con sides of Prop 8 in a dead heat. But oddly, the one element you won't see in any of the ads, pro or con, is how our children, the over 52,000 California children being raised by gay or lesbian parents, will be impacted.

The Yes on 8 folks don't want our families mentioned because it will expose the lie that their main concern is protecting children.

For the No on 8 folks (our side), apparently it was a tactical decision; they don't want our families mentioned because they're afraid that if undecided voters realize we're actually raising children, they'll freak out.

I guess I have more faith in people.

I like the ad's point--that there are lots of kids with gay parents who would benefit from the protections of marriage, and that these families aren't going to disappear if Prop. 8 passes. I don't like its misleading suggestion that only 14% of California's families are married people with kids. Slightly more than half of California households were made up of married couples, according to the 2000 census, and more than two-thirds of families with children had married parents. Even excluding divorced people, it's hard to imagine how you get the total down to 14% unless you exclude older people whose kids are grown.

As the polls show Prop. 8 as a dead-heat, here's some reading for family-values voters:

No: Are our families that different?
By MINDY J. BLUM

To the woman dropping off her child at elementary school and driving the 1999 green Honda Odyssey with the "Yes on 8" bumper sticker: I noticed you this morning, when I was dropping off my son. Your car is my car's twin, except the bumper sticker on mine says, "No on 8." So I've been wondering about you and your life. Is it really different from my life? Are our values really different? I prize commitment and fidelity. My spouse and I have been together for 24 years. We have two children, a dog, a cat, 2 guinea pigs and a mortgage I try not to think about. No matter what I'm doing, some part of my brain is always tracking how much milk there is in the fridge.

I wonder about your life and your spouse. How long have you been together (assuming you're married)? Do you have trouble tending to your relationship while wanting to be so present for your children? How old are your kids? What grade is your child in? Mine's in fourth.

Tell me, do you dread all of the gluing and angst that comes with the fourth-grade build-a-Mission project as much as I do?

How much of your waking time is spent thinking about how you raise your children and the sort of people you want them to be? Do your children complain about going to religious services on the weekend, like mine do? Do they say, "Are you kidding me?," like it's a surprise, rather than your weekly routine? Do you have parents that you are also looking out for? Are you sometimes divided between the kids and your folks?

At the end of the night, do you flop onto the sofa, exhausted? And do you — finally — now that the kids are in bed, look across to your spouse for that kiss, that moment of support, or maybe you just say, "Can you pass the remote control, honey"?

So, Ms. 1999 Green Honda Odyssey Woman with the "Yes on 8" bumper sticker, this July 27th I got to marry my spouse, the woman I've loved since I was 21. Surrounded by my closest family — and I'm fortunate to include my in-laws on that list — and our dearest friends, our children got to hear our clergy utter the words, "by the powers vested in me by the state of California" and ... finally... our family's reality (namely, that our lives are the same as everyone else's) became legal reality.

When you and I are working a booth together at the spring fundraiser, discussing those funny sounds our Odysseys make, I pray that I will still be married and that you will have helped. Because, in truth, you will see that our days and our lives are the same: on the surface, we may be paying bills, buying groceries, and helping with homework but, at the heart — at the very core — the richness in our lives comes from our love and devotion to family. Please vote "no" on Prop. 8.

Mindy J. Blum is a clinical psychologist who is currently working as a stay-at-home mom in South Pasadena.

As a journalistic aside, I note that this article was submitted to the OC Register but published, without checking with the author, only on the paper's website. And, alas, it seems likely that the only people who read Prop. 8 arguments on a newspaper's website are those who've already made up their minds. The same goes for ads on YouTube instead of regular television. The web is a great communication tool, but it doesn't encourage the same stumble-on-it access of traditional media.

What If She'd Had Norah Vincent Over for Dinner?

The official back story here is so damned weird. Woody Kaplan and Wendy Kaminer are on the board of advisors of FIRE, which is often excoriated for defending the free speech rights of evangelicals on campus. Norah Vincent, whom Dole's press release quotes as an authority, is a lesbian who wrote a (good) book about pretending to be a man. Elizabeth Dole must be in real trouble. Too bad. I can't stand her, but I don't want the Democrats to gain the seat. 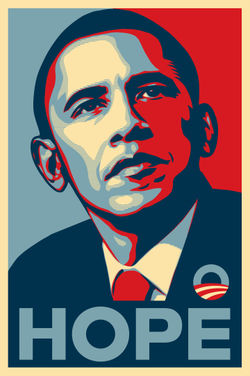 The Barack Obama Fathead is sold out. But you can still get a McCain.

It's apparently widely believed that we don't exist. Maybe because women don't buy our books?

Upward Mobility in the Kitchen

The LAT's Anna Gorman reports on the immigrant career ladder running from dish washer to chef.

From Surging to Dwelling

Grant McCracken has a smart take on how consumption shifts in a downturn.