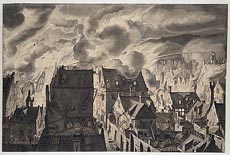 I'm in Amsterdam, where I spoke this morning at a corporate conference on experience design. My schedule and jet lag haven't allowed much time for tourism, but I did spend a little time museum-hopping yesterday. At the Rijksmuseum, I enjoyed this special exhibit on the work of Jan van der Heyden, a 17th-century artist who specialized in painting views of cities and buildings, the genre of Dutch painting I tend to like best.

What particularly fascinated me about van der Heyden, whose work I didn't know at all, was the way he combined his art with work as an inventor and entrepreneur. His most important invention was a fire-fighting system that combined an engine for pumping water with a long leather fire hose. The pump was an improvement on existing technology, the long hose a new idea that allowed firemen to get water to the heart of a fire rather than simply spraying the facade of a burning building. Van der Heyden not only invented this system but built and sold it, promoting it with a book of prints showing the devastation of urban fires and the advantages of the pump system in fighting them. He's a great example of the mingling of art, commerce, and technology, each complementing the others.

The exhibition, which runs through April 30, includes the prints, including some of Van der Heyden's preliminary sketches, and a later version of his fire engine, which was in operation from 1724 to 1928. One of the prints is shown above; click for a larger version. For more, visit the exhibit's website.