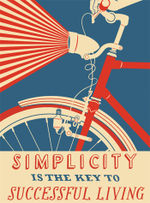 If anyone should fear a Depression, it should be journalists, who are already the equivalent of 1980s steelworkers. But instead, they seem positively giddy with anticipation at the prospect of a return to '30s-style hardship--without, of course, the real hardship of the 1930s. (We're all yuppies now.) The Boston Globe's Drake Bennett asked a bunch of people, including me, what a 21st-century Depression might look like. The results sounded pretty damned good to some people--a sure sign of an affluent society, or at least affluent commentators.

The prospect of a Depression is already creating jobs for (a few) writers. Hodding Carter IV has gotten a book deal described by Publishers Weekly this way:

After 10 years of profligate spending fueled by real estate flips, refinancing and credit card debt, the author will write about living on what he actually earns. In order to do so, he and his family of six will mine cost-saving techniques from the Great Depression and the first cookbook in America, and stay within their budget, whether that means growing their own food or bartering for things they need. Carter is writing a column based on his experiences for Gourmet.

If that last line doesn't bring a smile to your face, you really are depressed.

I applaud Carter's entrepreneurial spirit, but I don't think that living within your means really requires growing your own food or relying on ancient cookbooks. This is just a book gimmick.

Even more entrepreneurial is Blogging Queen Arianna Huffington, with a plea for more free content:

So we want to hear from you. How is the downturn affecting you and your family? Have you lost your job? Your home? Are you seeing For Sale signs on your street? Are more businesses in your town going under? How are you making ends meet? What are you hearing from your friends, your neighbors, your coworkers? Even if you still have your job and your home, and the ability to send your kids to college, how has the deep economic recession affected your outlook, your mood, your spending habits? If you work for a charity or a food bank -- what are you seeing?

Tell us your stories. Blogging about them and your feelings -- including your anger, your fears, your hopes -- is a great way to cope with the many personal, social, and professional dislocations that the hard times are producing.

Meanwhile, ReadyMade magazine, whose founders' experience with economic downturns is limited to the dot-com bust, calls on designers to imagine New Deal-style propaganda for a New Depression:

How might the current government stem the tide of economic and psychological depression? Can artists and designers help in similar ways today? It's curious that the WPA style has been reprised in the recent past as a quaint retro conceit, but today may be an opportune time for a brand-new graphic language — equal in impact to the original initiative, but decidedly different — to help rally the cause of hope and optimism.

Oh the thrill of imagining a Great Depression. It's an opportunity for Great Design and Really Cool Government.

Some designers are already profiting. The Telegraph reports that Depression-themed Christmas cards are a hit.

So far, fortunately, these are all fantasies. Peggy Noonan is right when she observes that "everything looks the same." Stocks have crashed to 2004 levels, but today's 6.5 percent unemployment rate, while high, is a lot lower than rates in the first half of the 1980s. And don't get me started on the horrors of the 1970s. (Speaking of which, I'm eagerly awaiting the arrival of Robert Samuelson's new book, The Great Inflation and Its Aftermath: The Past and Future of American Affluence

It's not a Depression, folks, and it wouldn't be nearly as fun to think about if it were.

Posted by Virginia Postrel on December 04, 2008