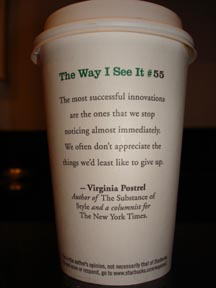 Eugene Volokh and Nick Gillespie blogged about "my" Starbucks cup back in November, but before I had a chance to see one myself, the season of the Red Cup descended on Starbucks. But the white cups are back, and I finally found one of mine. I had a little trouble, since when you actually look at a Starbucks cup it looks like this: 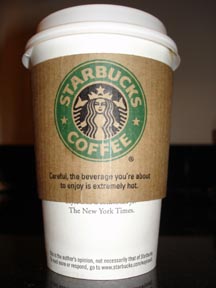 Starbucks went to a lot of trouble to solicit quotes from dozens of people. It designed and printed all these special cups. All the while forgetting that their cups come with a big brown cover right where the quotes go. Oops.

UPDATE: Just in case you might get the wrong idea from Dan Drezner, I didn't get paid for my Starbucks quote. Before I submitted it, however, they did send me a gift card for either $10 or $15 (I forget). I rarely drink Starbucks products--I live on Diet Coke--but it did cover some frappucinos for Professor Postrel.