This post was originally sent out through my Substack newsletter on May 3. To read current entries and subscribe, go here.

Since August, I’ve been enjoying a two-year appointment as a Visiting Fellow at the Smith Institute for Political Economy and Philosophy at Chapman University in Orange County. The institute is named for two people: our colleague Vernon Smith, who won the Nobel prize in economics for his pioneering work on experimental economics, and Adam Smith, the 18th-century economist and moral philosopher most famous for The Wealth of Nations. One of the institute’s missions is to reintegrate economics and the humanities, in the tradition of Adam Smith. Along those lines, this year I co-taught a course called “Consumerism and Its Discontents” with an economist. (This course, which had been previously taught in 2018, uses The Substance of Style, among other works, including The Great Gatsby, Veblen’s The Theory of the Leisure Class, and Jennifer Egan’s novel A Visit from the Goon Squad.) I’m now working to design a new first-year seminar for next year called “Ambition and the Meanings of Success.” It, too, will be co-taught in a discussion format—both Smith Institute practices.

On the syllabus for each course, I’ve incorporated a passage from Adam Smith’s Theory of Moral Sentiments called “Of the Effect of Utility upon the Sentiment of Approbation.” I’m a bit obsessed with this passage, which gets richer every time I read it. It’s about why we often go to great trouble and expense not merely to attain a goal but because we’re enamored with the means of attaining it. The puzzle, for Smith, is that “the exact adjustment of the means for attaining any conveniency or pleasure, should frequently be more regarded, than that very conveniency or pleasure.”

Smith spins out this paradox, applying it to everything from furniture arrangement to designs for public improvements. Those who’ve read The Power of Glamour may recall a passage I cite about “the poor man’s son, whom heaven in its anger has visited with ambition.” He’s enraptured with a glamorous vision of wealthy contentment and works hard all his life to achieve it: “Through the whole of his life he pursues the idea of a certain artificial and elegant repose which he may never arrive at, for which he sacrifices a real tranquillity that is at all times in his power.”

I’ve been using some of my Smith Institute research time to investigate the material and cultural history behind another, quite contemporary paragraph. It’s about 18th-century pocket gadgets.

How many people ruin themselves by laying out money on trinkets of frivolous utility? What pleases these lovers of toys is not so much the utility, as the aptness of the machines which are fitted to promote it. All their pockets are stuffed with little conveniencies. They contrive new pockets, unknown in the clothes of other people, in order to carry a greater number. They walk about loaded with a multitude of baubles, in weight and sometimes in value not inferior to an ordinary Jew’s-box, some of which may sometimes be of some little use, but all of which might at all times be very well spared, and of which the whole utility is certainly not worth the fatigue of bearing the burden.

Some things simply seem cool. And often we go to more trouble than these “trinkets of frivolous utility” are worth. Smith isn’t talking about watches, which get their own separate discussion. So what were these pocket gadgets? For the past several months, off and on between other work, I’ve been investigating this question. 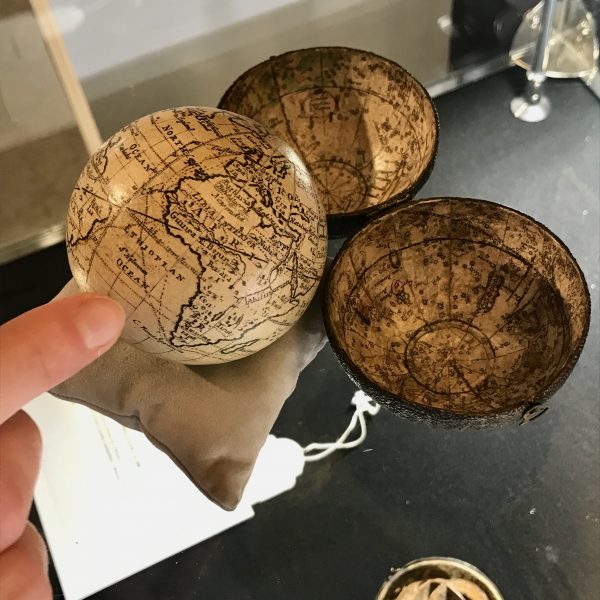 In Adam Smith’s day, and for roughly a century before and after him, pocket globes were popular consumer items. I tell their story and examine their appeal in my most recent article, published appropriately on Liberty Fund’s site, where you can find Adam Smith’s great work. (When I was in London doing research I met up with historian Anton Howes, who kindly played hand model above. If you’re interested in the history of invention and innovation, be sure to check out his Substack, “Age of Invention.”) Here’s a bit from the article:

A pocket globe was a different sort of object, “new and ingenious” but not primarily functional. “Its only Use was to keep in memory the situation of Countries, and order of the Constellations and particular Stars,” acknowledged Joseph Moxon, the London printer who popularized the pocket globe. Three inches in diameter, Moxon’s pocket globe came in a case lined with a map of the heavens, making it two globes in one.

Pocket globes exemplified what Adam Smith called “trinkets of frivolous utility,” otherwise known as consumer gadgets. Their appeal lay less in their function than in their cool factor. “What pleases these lovers of toys,” wrote Smith, “is not so much the utility, as the aptness of the machines which are fitted to promote it. All their pockets are stuffed with little conveniencies.” Like nutmeg grinders, étuis (“tweezer cases” to Smith), and tiny microscopes for examining flowers, pocket globes offered ingenuity you could carry around.

Aside from their scientific aura, pocket globes took on patriotic and imperial meaning. Here’s a 1799 poem titled “Sent, with a Pocket Globe, to a Young Gentleman Going On-Board the Amethyst Man-of-War.” I’ve included the footnotes from the original. The references were apparently as obscure in 1799 as they are today.

To England ere you bid adieu,
My friend and sailor, gallant Hugh,
Proud to exchange, at Honour’s call,
Your cricket for a cannon-ball.
This globe accept—so like, we know,
One whirl’d six thousand years ago.

By Him whose fiat rules the tide,
And bids our fleets in triumph ride!

On this small Globe, exulting, see
Great Britain in epitome;
Whose sailors keep the world in check
They, who to shores of Iceland roam,
In either India are at home.
Learn, here, to study daring Drake,
There Raleigh voyaged, here fought Blake;
Contemplate Cooke’s eventful story
Or follow Anson’s path to glory
See Rodney, deck'd with flags, advance
From vanquish’d Holland, Spain, and France!
But vain the talk to number o’er
These heroes of the British shore.

And, O my Namesake, whilst your burn
To fight and triumph in your turn,
Let nicest Honour be your guide,
Your Pole-star, though the dangerous tide,
Then, when the trump of war shall blow,
And George commands to blast the foe,
Like Norman Hugo,* Ridware’s lord,
With stern defiance draw your sword;
Like cross-legged Henry* point your rage
Where Infidels the battle wage;
Like fam’d Sir Robert,* win renown
In cause of Country, King, and Crown,
With brave Sir Bertin* bravely vie:
They knew to conquer, or to die!
The battle gain’d—safe, amidst cannon’s roar,
In the proud Amethyst approach the shore,
There to receive the meed of valour won,
Whilst parents own, with pride, their gallant son.
—H.M.C.

Friday, May 13, Johns Hopkins Applied Physics Laboratory, Laurel, MD: I’ll be giving a talk on The Fabric of Civilization, complete with as many show and tell items as I can fit in my luggage (definitely including examples of magnetic core memory and a Jacquard punchcards). Info on the JHAPL symposium series here.

Friday, May 20 to Sunday, May 22, Princeton University: No talks, no books, just a lot of orange and black, as Steve and I attend our 40th Reunion. Hope to see all our college friends there! Stay tuned for photos in ridiculous getups that encourage bonding.

Monday, May 23 to Wednesday, May 23 (leaving early afternoon): New York City, schedule TBD. If you have something in mind, please let me know.

Thursday, June 30 to Friday, July 1: A Tapestry of Rules: Institutions and cloth industries in global comparative perspective, 1750-2000, University of Utrecht, Utrecht, The Netherlands. I’ll be giving a talk on popularizing scholarly research and soaking up more of same.

I’ll be in Europe until July 8, so if you have something in mind, please let me know.