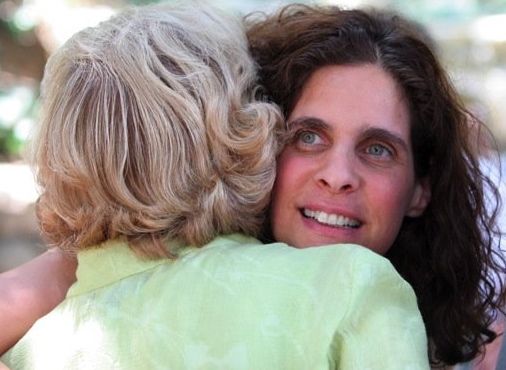 I understand why people who don't have any close gay friends or relatives think single-sex marriage is strange and disruptive. But it isn't. It's merely a way of turning de facto relationships into de jure ones. And the relationships that distinguish de jure marriage aren't so much those between spouses but those between the married couple and other people, perhaps most importantly their extended families. As of July 27, this happy woman went from my sister-not-exactly-in-law, her status for the past two decades, to my actual legal sister-in-law. And the woman she's hugging became her legal mother-in-law, instead of the unofficial relative who comes to visit for a month every year, whose medical care she frets over, and whose new living arrangements she researched. (Did I mention that Mindy, who has a Ph.D. in clinical psychology, is now a stay-at-home mom? How traditional can you get? Steve and I are the radical ones.) 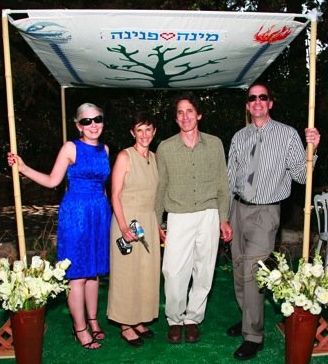 Neither, as some conservatives imagine, was the wedding a mockery of marriage or tradition. This was no Black Mass (or the Jewish equivalent). To the contrary, it was a continuation of cherished religious and family traditions. Pam and Mindy even got married under the chuppa I'd made for our own wedding 22 years ago, back when they were just girlfriends. I cross-stitched an applique with their Hebrew names to cover our own. That I mismeasured and allowed just a tiny bit of ours to peek out seems somehow appropriate. (The couple in the center built the structure that holds up the very heavy chuppa; the versatile woman with the drill is also the cantor.) 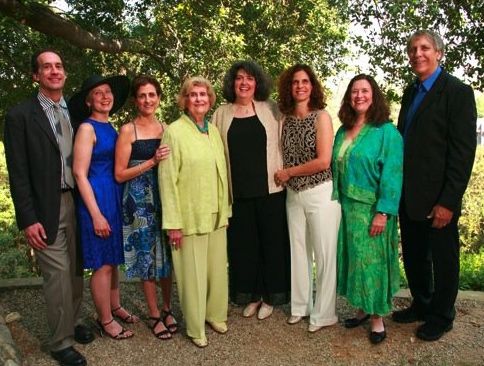 Growing up with three younger brothers, I always wanted a sister (though, in retrospect, I was better off being the princess). Then I married a guy with three older sisters and, once all our siblings were paired off, wound up with six de jure sisters-in-law and one de facto one. Gay weddings just mean more posing for awkward group photos--nothing radical about that. (One husband couldn't make it.) 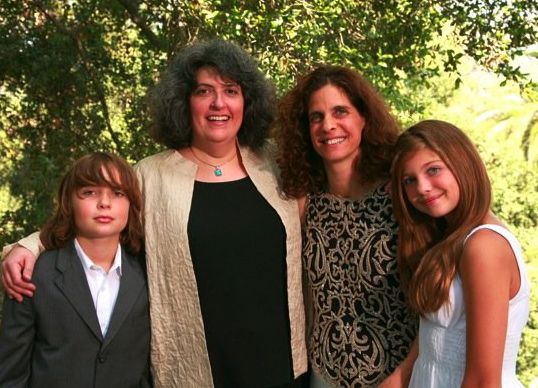 My sisters-in-laws' wedding was less transformative than Andrew Sullivan's--Aunt Mindy has always been just that to Pam's nieces and nephews, who take it for granted that Pam and Mindy's two kids are their cousins--but the wedding does allow the extended family to claim without awkwardness or hesitation the vocabulary set aside to recognize the enduring relationships created by marriage. So I like what Andrew writes in the new Atlantic:

Ours was not, we realized, a different institution, after all, and we were not different kinds of people. In the doing of it, it was the same as my sister's wedding and we were the same as my sister and brother-in-law. The strange, bewildering emotions of the moment, the cake and reception, the distracted children and weeping mothers, the morning's butterflies and the night's drunkenness: this was not a gay marriage; it was a marriage.

And our families instantly and for the first time since our early childhood became not just institutions in which we were included, but institutions that we too owned and perpetuated. My sister spoke of her marriage as if it were interchangeable with my own, and my niece and nephew had no qualms in referring to my husband as their new uncle. The embossed invitations and the floral bouquets and the fear of fluffing our vows: in these tiny, bonding gestures of integration, we all came to see an alienating distinction become a unifying difference.

It was a moment that shifted a sense of our own identity within our psyches and even our souls. Once this happens, the law eventually follows. In California this spring, it did.