Neal Stephenson's Anathem on sale for $1.99 for Kindle 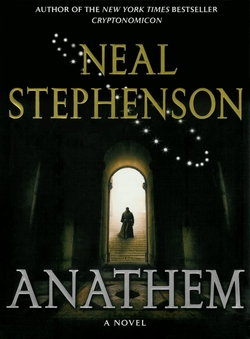 I've written columns for Bloomberg and TheAtlantic.com taking issue, in different ways, with publishers' stubborn refusal to recognize price elasticity when deciding how to price their e-books. In recent months, however, I've noticed that, unlike most publishers, HarperCollins gets it and, in particular, understands how price elasticity interacts with short-term sales on books whose authors have big fan bases. In short, if you give them a low enough price, a lot of fans will buy electronic copies of books they already own and also recommend them to new readers. If you follow my Twitter feed, you might have noticed, for instance, the $1.99 sale they ran on the Kindle version Neil Gaiman's American Gods (now back to $9.99

) and a later one for his Neverwhere.

The latest example is a similar $1.99 sale on the Kindle edition of Neal Stephenson's excellent novel Anathem

, which I coincidentally just listened to on CDs (28 of them--it's fat). I already own the Kindle edition--which came in handy when a CD was scratched at the most famous line in the book (about a protractor), and I had to do a search to find out what I missed. But if you don't and you like science fiction with vivid settings and big ideas, this is a great deal. And for $1.99, it's so cheap you don't have to feel obligated to tackle it any time soon. Here's the Amazon link

. And here's an article I wrote on why short-term sales are a good idea. HarperCollins seems to up the urgency by not saying when the sale ends--but "soon" is a good guess. I wonder if they'd be up for a sale on The Substance of Style

UPDATE: HarperCollins has agreed to a Kindle sale on TSOS, starting May 1. Watch this space, Twitter, or Facebook for details.