Purity, Sorcery, and Cancel Culture: What anthropologist Mary Douglas's work can tell us about the purity conflicts roiling our culture.

This post went out to subscribers to my Substack newsletter on June 14. Check out all the posts, including ones from the archives not reposted here, and subscribe here.

In between other subjects and more pressing deadlines, I’ve been thinking about purity. Our public discussions have become obsessed with it.

The pandemic has forced us to contend with a new and invisible contaminant, resulting in conflicts about monitoring, safeguarding, and defining purity. Is wearing a mask a vital shield or a violation of individual integrity? Does a vaccine protect against contamination or constitute pollution?

The quest for purity informs cancel culture. It pushes partisans to ever-greater extremes, even when those positions are politically self-defeating. It turns historical heroes /into villains and closes nuclear power plants in the face of climate change. It makes the ideal the enemy of the improved, the perfect the exterminator of the better.
If we want to understand our cultural moment, we need to think seriously about purity.

The moral foundations theory associated most prominently with social psychologist Jonathan Haidt suggests that purity concerns separate conservatives from liberals and libertarians. Purity matters a lot to conservatives, relatively little to liberals, and hardly at all to libertarians.

I like and admire Jon Haidt, but I don’t believe this claim. I have lived too long in the land of detox cleanses and Prop. 65 warnings to accept that liberals don’t care about purity, sometimes to an obsessive degree. And I have witnessed too many libertarian disputes about who qualifies as a “real libertarian” to equate laissez-faire attitudes toward sex, drugs, and bioengineering with indifference to purity.

In reminding us of the importance of purity in defining political identity, moral foundations theory points in a useful direction. But anthropology is more useful than psychology in understanding what’s going on. Purity concerns are a human universal. They just take different forms.

Purity is about identifying and eliminating contaminants—anomalies that are sources of danger. The danger may be physical, spiritual, cultural, or moral. To purify is to purge whatever is out of place. It establishes what belongs by banishing what does not. “The quest for purity is pursued by rejection,” writes anthropologist Mary Douglas in her landmark 1966 book Purity and Danger.

Every culture and every person beyond infancy maintains standards separating clean from unclean, safe from hazardous, permitted from forbidden. We police purity when we do laundry, copyedit manuscripts, or recite religious creeds. Vegans observe one system of dietary purity, paleo adherents another. Concepts of purity are among the essential classifications we use to navigate the world.

The critical question, then, is not whether we care about purity but what we count as contamination. What characterizes an impurity? How small a trace constitutes pollution? Who decides? In many forms, these are the questions roiling our culture. 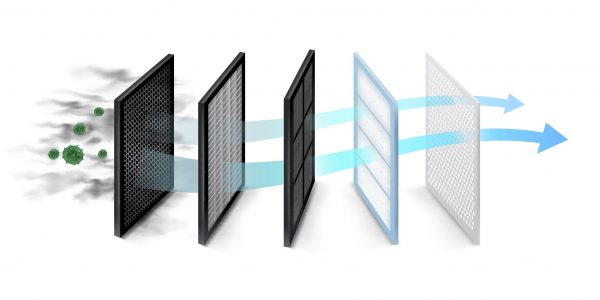 While many discussions of purity focus on the first question, the second and third are just as important—and not just for environmental regulators measuring effluents in parts per million. The law of diffusion dictates that every vegan dinner contains microscopic traces of dead animals, yet the alternative to ingesting them is starvation. Absolute purity is intolerable. At some level, the pollutant must cease to count. But how do we determine what that level is?

Take the latest Twitter-fueled purity purge and the organizational “dumpster fire” that followed. Dave Weigel, a national political reporter for The Washington Post, retweeted a lame joke: “Every girl is bi. You just have to figure out if it’s polar or sexual.” Felicia Sonmez, another national political reporter, tweeted an objection. Weigel apologized and deleted the offending joke. Sonmez then went on a multi-day Twitter campaign complaining about Weigel’s tweet, the Post’s social media policies, and the sometimes-abusive pushback against her tweets. Memos were issued. Statements were made. Weigel was suspended for 30 days without pay. Finally, the Post fired Sonmez.1

You might consider the joke unacceptably sexist and thus an impurity. But you might also deem it minor and dumb, the equivalent of a spot of lint on your clothes, to be flicked away and forgotten. Alternatively, you might consider it an indicator of deeper crimes, a social version of Lady Macbeth’s damn’d spot. Different people would make different judgments about whether Weigel violated the Post’s community-defining purity conventions and, if so, how seriously. Who decides what should be done? Who makes the rules about how best to restore purity?

Who makes the rules?

Here, another aspect of Douglas’s work offers a valuable rubric. In several forms over the course of her career, Douglas developed what she called Grid-Group theory.2 It posits two key dimensions that define the characteristics of social groups. Group is how integrated the members are with each other—how tight the group’s identity is. Grid is how rigid and well defined the rules are for establishing status and power. 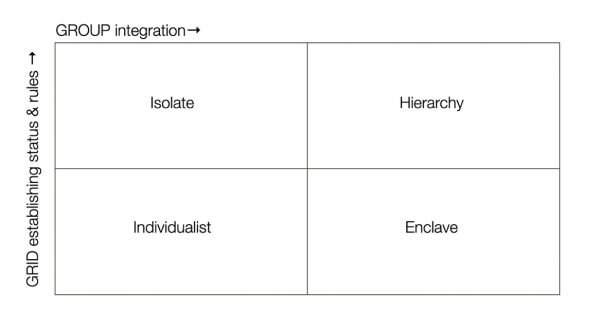 The result is a two-by-two matrix. Douglas classified groups with clear identities and rules as “hierarchies” and those with low integration and open status as “individualist.” The rare category of rigid status and low group affiliation she called “isolate.” And then there was the “enclave,” a well-defined community where power and status are always in flux. That’s where things get interesting, and sometimes frightening.

With no official authority, enclaves rely on emotional commitments and strongly held beliefs to maintain community cohesion. As a result, they tend to be subject to bouts of dangerous enthusiasm—literal and metaphorical witch hunts—in which belonging demands conformity to increasingly narrow patterns of thought and behavior. To stay cohesive, enclaves do a lot of banishing and boundary policing.

In an enclave, unleashing charges of impurity is a way to wield or obtain power. In traditional African cultures with enclave structures, Douglas observed, one result was the weaponization of sorcery allegations. “Any young man can plausibly accuse of sorcery a reactionary old incumbent of an office which he himself is qualified to occupy when the senior obstacle has been removed.” But, she warns, “If sorcery beliefs really serve as instruments for self-promotion they also ensure that the ladder of promotion is short and shaky.”

The 21st-century American version of sorcery allegations are charges of racism, sexism, harassment, and similar offenses. Many examples of “cancel culture” occur in enclaves—fan groups, for instance, or loose professional associations. In 2020, the online knitting community was torn apart by what British journalist Gavin Haynes dubbed a “purity spiral,” in which people who thought of themselves as kind-hearted liberals were suddenly ostracized and boycotted for alleged white supremacy.

The knitters in this purity spiral were a classic enclave. They were a tightly bound community (high “group”) without definite lines of authority (low “grid”). Although some knitters might be more influential than others at a given time, that influence was the outcome of choices among equals and could change at any time. Whether calculated or sincere, charges of white supremacy an opportunity to those seeking to enhance their own status—and posed a danger to the already prominent.

A newspaper is traditionally a hierarchy. Editors decide what gets published and who gets promoted. They decide what work is good and when good work justifies overlooking body odor, foul language, or other less-than-desirable personal qualities. They establish rules about what behaviors are off limits, whether accepting gifts from sources or, that favorite movie cliché, sleeping with them. They force writers to omit serial commas.

The internet, especially social media, has upended not just journalism’s business model but its organizational assumptions. Publication has become instantaneous, the line between professional journalism and personal expression blurry. Attention is precious, and journalists are rewarded for attracting traffic to themselves as well as their employers. The “brand called you” that Tom Peters prophesied in 1997 has become essential to surviving as a writer.

That model works for an individual operating independently, or as a gig worker going from job to job. But when infused into an organization, it threatens to turn a hierarchy into an enclave. When that happens, the sorcery charges start flying. 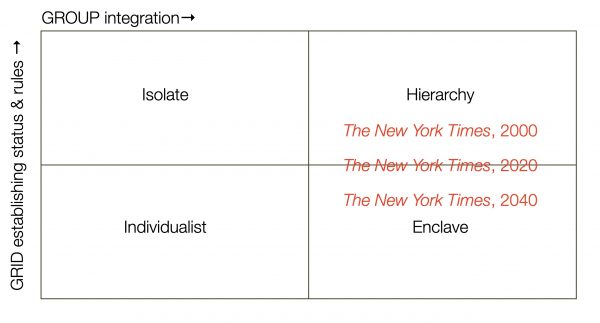 Last October, Anne Applebaum published an article in The Atlantic, appropriately titled “The New Puritans.” It did a good job of chronicling many recent purity spirals and establishing some consistent patterns.

The censoriousness, the shunning, the ritualized apologies, the public sacrifices—these are rather typical behaviors in illiberal societies with rigid cultural codes, enforced by heavy peer pressure. This is a story of moral panic, of cultural institutions policing or purifying themselves in the face of disapproving crowds. The crowds are no longer literal, as they once were in Salem, but rather online mobs, organized via Twitter, Facebook, or sometimes internal company Slack channels.

In response, Adam Gurri of Liberal Currents emphasized the selectiveness of Applebaum’s reporting. Of her roughly dozen sources, he wrote, “nearly all are professors or journalists at institutions like Yale or the New York Times, many quite prominent within those prestigious institutions.” The numbers are small, he maintained, and the people are privileged. Institutions always behave badly. All that has changed is that anyone can now be a publisher. “Between phone cameras, the stored and shareable nature of digital communication, and the Internet, everyone can now put a story out into the public view,” he wrote, and “that dramatically increases the overall odds that a media scandal will originate from within an institution.”

There’s a problem with this analysis. Simply because you possess documentary evidence of something negative about someone in your organization doesn’t mean you will be inclined to share it, even if you would like for the information to become public. Rules and bosses will stop you—if, that is, the organization is a hierarchy and you want to remain within it.

Applebaum’s New Puritans succeed because former hierarchies like The New York Times and Yale University are evolving into enclaves. The path to power and status is ill-defined, and anyone can police the group boundaries. Through allegations of impurity, students and employees who theoretically have little authority can quickly erode the legitimacy of veteran editors and even tenured faculty.

Terrifying for the relatively few individuals targeted, purity purges strike fear more broadly because they lack a stopping point. Zealous or ambitious people can keep shifting and tightening the definition of impurities. Even if the numbers are small, at least for the present, institutional structures have shifted in ways that portend amplifying conflict. And while the consequences for individuals may be severe, the social results could be devastating. Knitters may get along fine after a few purges and schisms, but how can knowledge-seeking organizations like universities and publications do their jobs if their members are afraid to be difficult or different? If they manage to function, will they remain credible?

The good news for those who fear the mob will come for them is that most workplaces are still definite hierarchies with no danger of becoming enclaves. They have clear profit-making missions and clear lines between company speech and personal expression. To keep employees from talking about internal matters, they have nondisclosure agreements and threats of termination.

It’s possible for ordinary people to become subject to enclave-driven social-media attacks, and small business owners, like some in the knitting story, are particularly vulnerable. But in most cases, there’s not enough to be gained. For those in the business of expression, however, the calls will come from inside the house until someone asserts the authority to stop them.

2 The best known version of Grid-Group was developed in her 1983 book with Aaron Wildavsky, Risk and Culture. Reflecting Wildavsky’s concerns as a libertarian-leaning political scientist, that version places more emphasis on ideological or political commitments rather than social structure. Here I draw on Douglas’s more purely anthropological analysis.

I have more to say on purity, as well as many questions I haven’t yet thought hard about. It might make a good subject for a book. What do you think? Here’s some wisdom on the subject, from one of my favorite films.