The Comforts of (a Messy) Home

I recently discovered (thanks to an email from him) that Steve Portigal, who may be most familiar to readers from his frequent comments on Grant McCracken's blog, has his own blog. In a recent post, he called attention to a series of Target ads featuring extraordinarily messy and wire-filled rooms: 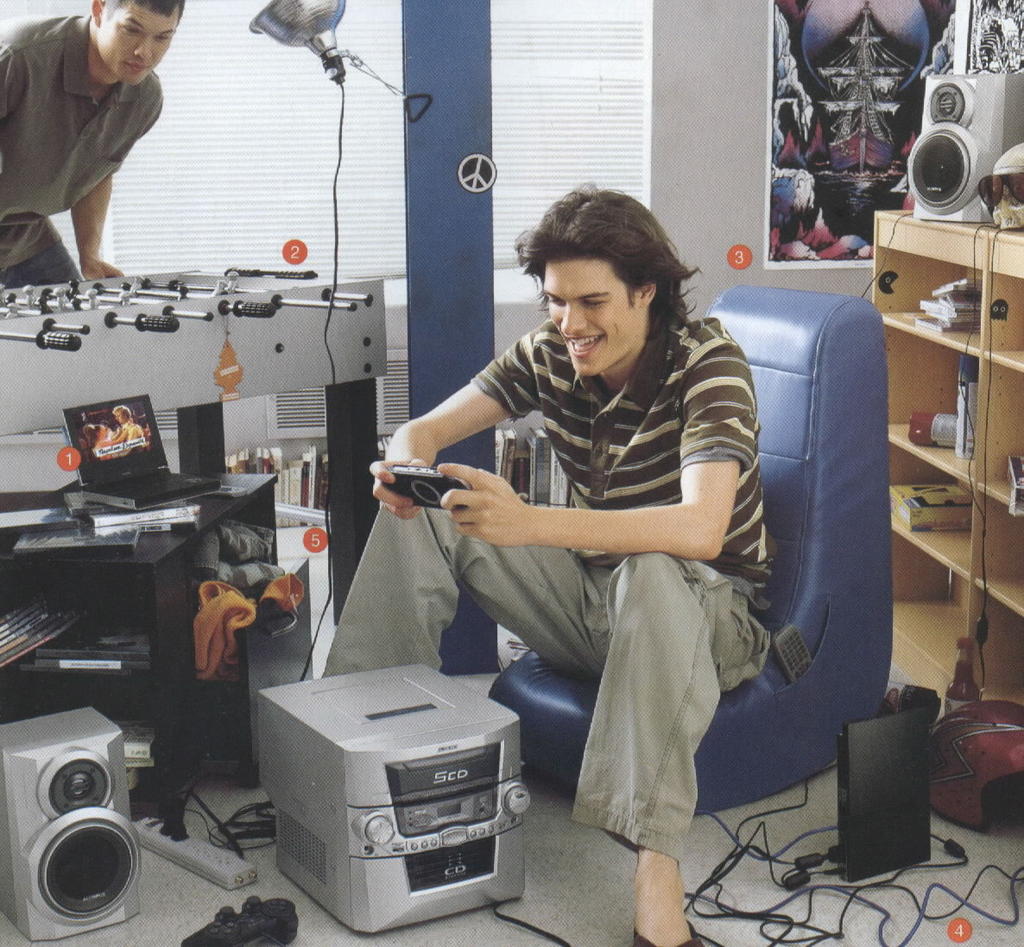 I was amazed to see pictures of messy rooms, where people own lots of stuff, it's messy, askew, and yes indeed, there are wires - cables, cords, the whole real deal.

Sure, the pictures are entirely stylized and sort of hyper-real, but somehow it's relieving to see a significant move away from the more idealized and yes glamourous consumer images that advertising is so fond of.

Whatever happened to wireless glamour? The same thing that tends to happen to every other kind of glamour: We got tired of it, because it was too much work. The grace, mystery, and idealism that give glamour its power aren't terribly compatible with everyday life, at least not the way most Americans want to live it. And when we're furnishing our homes (or our dorm rooms), we often prefer a comfortingly homey mess to glamour's impossible grace.

In his new book, Culture and Consumption II, Grant McCracken includes a chapter delving into the idea of "homeyness." (The short lead-in to this extended essay hilariously describes Grant's adventures as a guest on Oprah.) The ideas are too complex to summarize, but suffice it to say that homeyness is a desirable quality to many people and that it includes a lot of personal clutter:

Objects are homey when they have a personal significance for the owner (e.g., gifts, crafts, trophies, mementos, family heirlooms). A homemade ashtray assembled from shells collected on a summer holiday by the children served one family as a reminder of an important time and place in the history of the family and was therefore considered especially homey. Objects can also be homey when they are informal or playful in character (e.g., the novelty ashtray, a pillow in the shape of a football, a pillow with verse in needlepoint). Plants and flowers are objects that contribute to the homeyness of a room. Some objects are homey because they support or contain decorative objects (e.g., wooden hutches and what-nots)....Pictures of relatives, pets, and possessions are also homey. Paintings of certain kinds can have a homey character, especially sentimental treatments of landscapes or seascapes. Books in quantity can "furnish" a room and ggive it a homey character....

Respondents used a very particular set of adjectives to describe "homeyness." A favorite characterization of the homey place was to say that it looked "as though someone lived there." The terms "informal," "comfortable," "cozy," "relaxed," "secure," "unique," "old," "rich," "warm," "humble," "welcoming," "accommodating," "lived in," "country kitchenish" were all used as glosses...

The enemies of homeyness...were easily characterized. One respondent described an ornately formal living room as "cluttered up with a whole lot of fancy stuff" and therefore unhomey. The terms used to characterize unhomey homes were "pretentious," "formal," "stark," "elegant," "cold," "daunting," "sterile," "showpiece," "reserved," "controlled," "decorated," "modern," and even "Scandinavian."

Target is selling homeyness--of a youthful, technological sort--in those wire-filled ads. Glamour is the enemy of homeyness, so there's no need to hide the wires. (Just don't think about how you'd manage to walk across the room.)