This post went out to subscribers to my Substack newsletter on July 5. Check out all the posts, including ones from the archives not reposted here, and subscribe here.

After attending a conference in Utrecht, on Saturday I flew to Italy to do some follow-on textile research. Leaving Amsterdam’s Schiphol airport, however, required first standing in a four-hour line, longer any line I’ve seen in my 62+ years of life. Thousands of people, several miles long (I estimate 6 km based on the Pokemon Go count). Staff handed out bottles of water in a couple of places and gave us cookies to keep up our strength. We’d go through a massively long line in one room, only to emerge into another room or outside staging area at least as long. The longest imaginable Disneyland line would equal perhaps one of these segments.

The problem arises from staff shortages in security. It’s been pretty well reported in Europe but aside from Bloomberg (e.g., here and here) and specialty sites (e.g., here and here) the massive delays at this major hub have gotten relatively little attention in the U.S. I got to the airport more than three hours before my flight, naively imagining I’d have time to spare. Instead, I only made my flight to Florence because it was seriously delayed and even so, the doors were closed when I arrived at the gate. As the agents were telling me I couldn’t board, a pilot came out and said to let me on.

My itinerary calls for a return through Schiphol after an overnight stay in Amsterdam. I’m trying to figure out a way to avoid those lines.

In Praise of MRIs

Raymond Damadian, Paul Lauterbur, and Sir Peter Mansfield, who gave us the MRI machine, are the latest in HumanProgress.org’s series on Heroes of Progress.

Damadian created the world’s first MRI scanner after he realized that cancerous cells would produce different magnetic resonance signals when compared to normal, non-cancerous cells. Prompted by Damadian’s discoveries, Lauterbur developed a way for MRI machines to visualize these cells’ signal differences and produce a clear image of inside a patient’s body. Finally, Mansfield created a technique for MRI scans to be conducted in just seconds, rather than hours, and for the image that the scanners produced to be significantly clearer, and therefore more accurate. Each year, hundreds of millions of MRI scans take place. Thanks to their use, untold millions of lives have been extended or saved.

Mine is one of those lives. In 2007, I was diagnosed with what appeared to be a minor case of breast cancer. The tumor was tiny and it looked like I’d get surgery to cut it out and then possibly radiation treatment. The day before surgery, I went in for an MRI to map the cancer so that acupuncture-like needles could be inserted the next day to guide the surgeon. When I showed up for the surgery, I learned that the MRI had revealed massive amounts of lymphovascular invasion that had been completely undetected on mammograms. The cancer was much more serious than expected. That surgery, which failed to get clean margins, was followed by chemotherapy, more surgery, radiation, and—critically important—the miracle drug Herceptin.

Why you can’t get the best sunscreens in the U.S.: An Atlantic article on one of the pet peeves of my friend Amy Alkon, who is even paler than I am. (Her site is having some technical issues, so if you click on the link it may not work unless you’re using Safari.)

And a plaque honoring a hero of progress: Agostino Bassi, whose hometown I visited this week. You can read about his work in The Fabric of Civilization. 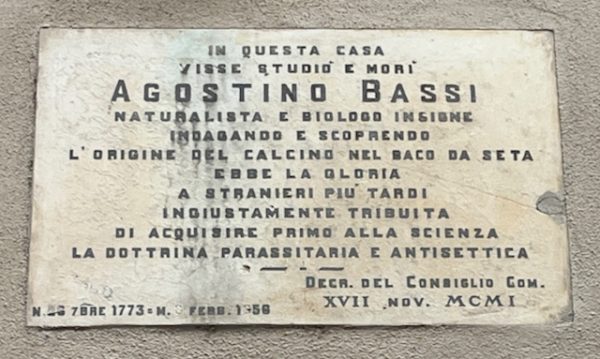