Kausfiles reports that "the hunt for Christopher Hitchens' real opinion goes into its final days! CIA experts are trying to verify the authenticity of the latest report from the field , which seems to show a slight but significant pro-Bush tilt. ... But it's still too close to call. ... Rumors persist that a videotape may soon surface in which the reclusive British commentator issues a coded message to his followers."

The answer is here. Really (though there's wiggle room). You can also read what CH thinks of Dallas women.

Slashdot has a terrific interview with Neal Stephenson (via GeekPress). Not surprisingly, I particularly enjoyed his discussion of writing as a profession, though, like many nonfiction writers, I don't really fall into either of his categories.

Though I'm voting for Bush, part of me really wants to see the huge intraparty fight that will break out if Kerry wins--not just between the cut-and-run party and the get-more-allies party but between the Rubinesque New Dems and the folks who think "corporation" is a damning pejorative. The anti-market left has reemerged, and this year it's voting for Kerry. Do the Dems really want allies who hate commerce?

How Can You Vote for a Guy Like That?

"How can you vote for Bush?" my old roommate asked me during the last go-round. "You hated guys like that in college."

Actually, I ignored guys like that in college. (It was the Eliot Spitzers and Bob Giuffras who gave me the creeps.) They were fine in their place. I just didn't want to date them.

Which brings me to this election. I'm not picking a boyfriend here either, or, for that matter, an intellectual mentor. Given the current balance of power in Congress, there are only two things the president can significantly affect: foreign policy and regulatory policy. I prefer Bush to Kerry on both. It's a cold calculation.

Though I supported the war in Iraq, I never thought it would be easy. In fact, I thought things would be worse. It was a high-risk venture, requiring long-term commitment to secure long-term, strategic gains. I wish Bush had warned the public more about the inevitable difficulties, but I do not feel betrayed. I feel no need to lash out at the president.

Voting is an expressive activity, but it need not be emotional. Andrew Sullivan's invocation of "The deep emotional bond so many of us formed with the president back then" does not apply to me. Bush leaves me cold and always has. I never wanted to hang out with him, so I don't take our policy differences personally. I never idolized his leadership, so I don't feel he's failed me. He gets my vote in part because I don't identify with him. He's just a hired hand, and he's better than the alternative.

In his Newsweek column Fareed Zakaria laments the mindless team-spirit he finds in Washington politics.

"Crossfire" is now a metaphor for politics in Washington. There are two teams, each with its own politicians, think tanks, special-interest groups, media outfits and TV personalities. The requirement of this world is that you must always be reliably left or right. If you are an analyst "on the right" you must always support what the team does. If President Bush invades Iraq, you support it. If he increases the deficit, you support that. If he opposes stem-cell research, you support that, too. There's no ideological coherence or consistency to these positions. Republicans are now fervent nation-builders, but only two years ago scornfully opposed the whole concept. You must support your team. If you don't, it screws up the TV show.

The problem is much larger than television. Any policy proposed from the left is sure to meet an instant avalanche of criticism from right-wing think tanks, talk shows, political groups and, of course, politicians. This is less true of the left, but just wait. Liberal donors are forming groups of their own, hoping to mirror the right's success at this game. All of which means that honest debate, bipartisanship and, hence, governance become close to impossible.

I would put it somewhat differently. "Left" and "right" have lost much of their Cold War coherence and have been replaced not with more meaningful intellectual or cultural categories but with "Democrat" and "Republican." That suits two constituencies: 1) People seeking entertainment. 2) People seeking election. TV shows like Crossfire and all those bestsellers by partisan provocateurs (and provocateuses) serve both.

In reality, Washington's "right-wing" think tanks offer plenty of intellectual diversity (including a range of intellectual quality and integrity, sometimes within the same organization). You just won't see that diversity reflected in television bookings. There, as in party politics, the goal is predictability and message discipline. The lack of "honest debate" and "bipartisanship" isn't a bug; it's a feature. And it will remain a feature until a political crisis sends one or both parties looking for policy entrepreneurs or until media patrons decide that intellectual exploration and genuine debate are more interesting than talking points. In the meantime, the long-term debate will take place offstage.

Should I Blame George W.?

For the breakin? After all, isn't the president supposed to protect us? If he'd done his job as governor, there wouldn't be any criminals in Texas. Right?

Megan McCardle (a.k.a. Jane Galt and, this week, a.k.a. 1/3 of Instapundit) comes to a decision about her presidential vote, by applying good advice about marriage.

My Latest Excuse for Not Blogging More

In 14 years of living in Los Angeles, including five in an apartment with no security (not even a garage door), I was never robbed. In four years in Dallas, I've had my car broken into and now my house broken into.

Yesterday I walked out my front door at around 2:30 to do some errands and came back a couple of hours later. The door looked like this: 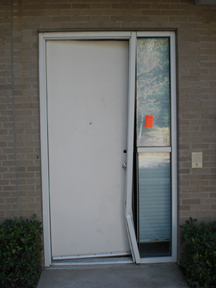 Someone had jimmied the steel door open enough to break the locks. Fortunately, nothing was taken, probably because the would-be robbers were scared off by the tweeting of the alarm system. (The alarm itself was not set at the time.) We got off easy, but coming home to a break-in was a scary experience, especially since Steve is teaching night classes this term. I was pretty shaken.

And it was a big hassle. I couldn't leave the house yesterday, and I spent this morning with a locksmith, who replaced the broken lock with a high-security Medeco deadbolt that seems screwdriver-proof. At least the steel door means we didn't have to buy a new door as well. Since Dallas is crime-ridden, and property crimes are a low priority, the police took only a phone report.

What Will the Election "Prove"?

Conventional wisdom holds, and I generally agree, that the election is a referendum on George Bush's presidency. From a purely political point of view, then, it doesn't matter that John Kerry's positions are, shall we say, ambiguous. Voters are simply picking between "Bush" and "Not Bush." If Kerry wins, he won't have a mandate for any particular policies of his own, only not to be Bush.

By selecting points of distinction, Kerry's campaign does, however, largely define what "Bush" and "Not Bush" mean. The election isn't a referendum on Bush's wetlands policies or his view of U.S.-Mexico relations. Nor is it about such hot-button issues as immigration or gay marriage, for the simple reason that John Kerry hasn't made a big deal of these topics and has generally sought to blur any distinctions between himself and Bush.

It's primarily about three questions, in order of priority:

1) Does George Bush have the right temperament to be president? Is he a strong, decisive leader? Or is he close-minded and afraid to listen to disagreements or admit mistakes? Is he a focused manager who chooses his priorities and sticks to them? Or is he a dimwit who can't keep up with more than a few issues? Is his religious faith a plus or a minus? Is he too confrontational at home and abroad? Does he give you the creeps? That last question may be the most important of all.

2) Is the war in Iraq right or wrong? You can complicate this question by adding nuances about exit strategies, troop levels, or the broader strategy of preemptive attack. But those nuances won't decide the election, nor will they be the focus of post-election analysis.

3) Is Bush too friendly to corporations and rich people? Contrary to what you might think from reading some libertarian-leaning bloggers, John Kerry is not running against George Bush's extravagant new Medicare entitlement or his expansive domestic spending. He is running against "tax cuts for the rich" and prescription drugs without price controls. Voting for "Not Bush" means voting for "not enough domestic spending" and "not enough taxes on the rich."

As Billy White wrote when he sent me this link, "Who has the time to come up with this stuff?" I'm glad someone does.